Luis Enrique relishing El Clasico with or without Neymar

Barca trail Madrid by 3 points at the top of La Liga and have played a game more than their title rivals. 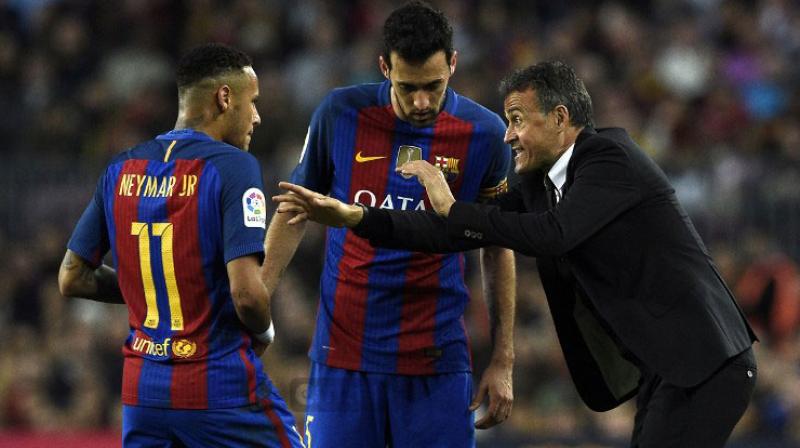 Neymar is expected to serve the second of a three-game ban for his red card and subsequent sarcastic applause of the officials in Barca's 2-0 defeat to Malaga a fortnight ago. (Photo: AFP)

Barcelona: Barcelona boss Luis Enrique said he has prepared for his last El Clasico against Real Madrid on Sunday with or without star forward Neymar.

The Brazilian is expected to serve the second of a three-game ban for his red card and subsequent sarcastic applause of the officials in Barca's 2-0 defeat to Malaga a fortnight ago.

However, the club have explored every option to have him available.

An appeal to Spain's Court of Arbitration for Sport (TAD) was deliberately delayed until after the court's normal Friday meeting to decide on appeals in the hope that would automatically see the ban suspended.

However, TAD could still call an emergency meeting on Saturday, and, even if they don't, Barca would risk being sanctioned with defeat for fielding an ineligible player should Neymar feature.

"I think the club are correct in their position to defend the club's interests," said Enrique, who is leaving Barca at the end of the season.

"As a coach I am prepared to play with Neymar or without him."

Barca trail Madrid by three points at the top of La Liga and have played a game more than their title rivals.

And Enrique accepted Barca's hopes of a third straight title depend on winning at the Santiago Bernabeu.

"Given how close it is to the end of the season it is a decisive weekend," he added.

"This time a Clasico can decide or almost decide the league or leave it very open.

Barca were dumped out of the Champions League by Juventus in midweek, but Enrique believes his players should see the chance to bounce straight back against Madrid as an opportunity rather than extra pressure.

"For some it means it is a very attractive challenge and for others it means pressure," he added.

"I prefer to take it as an attractive and marvellous challenge. It's a chance to move level on points with Madrid."