PSG win their sixth Ligue 1 title, Neymar and Cavani return to the pitch from injury

Mbappe took his league tally for the season to 30 following his treble, which came just hours after PSG were crowned champions. 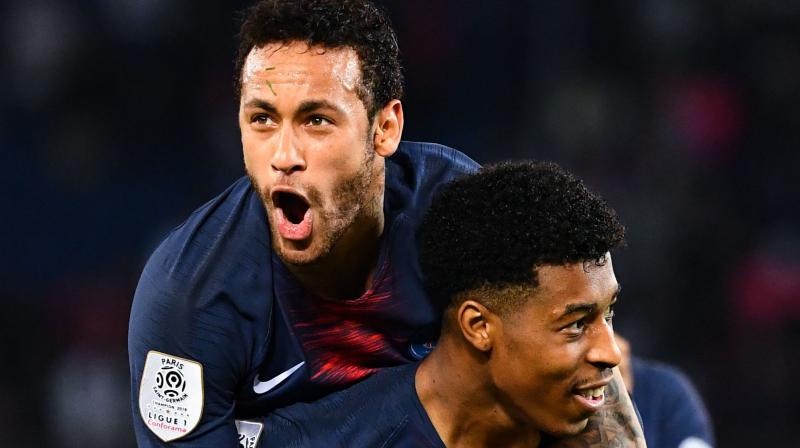 Neymar's return at the start of the second half replacing Layvin Kurzawa is the cherry on the cake for Thomas Tuchel's side, who had been without the Brazilian superstar since January 23 with a right foot injury. (Photo: AFP)

Paris: Neymar joined the Paris Saint-Germain title party on Sunday when he made his first appearance since January as Kylian Mbappe swept aside Monaco with a hat-trick in a 3-1 win for the newly-crowned Ligue 1 champions.

Mbappe took his league tally for the season to 30 following his treble, which came just hours after PSG were crowned champions for the sixth time in seven years when closest challengers Lille dropped points.

Neymar's return at the start of the second half replacing Layvin Kurzawa is the cherry on the cake for Thomas Tuchel's side, who had been without the Brazilian superstar since January 23 with a right foot injury.

Edinson Cavani also returned to action as a second half substitute, having a late strike correctly ruled out for offside, meaning that PSG's famed front three are back together following months apart.

Mbappe has thrived in the absence of his strike partners, and gave his side a 2-0 first-half lead with two neat finishes, the first coming in the 15th minute and the second seven minutes before the break after a beautiful pass from Dani Alves.

The World Cup winner then put the three points beyond doubt when he tapped in Alves' low cross nine minutes after the break.

Aleksandr Golovin rolled home a consolation for the away side, who remain in trouble in 16th place and are only four points away from the relegation play-off spot.

On Sunday afternoon Lille ended their challenge with a goalless draw at Toulouse that left them 16 points behind PSG with only five games to play and allowed capital club to celebrate the title after missing chances to seal it in their previous matches.

The Parisians have struggled with key injuries in recent weeks and they lost Italian international midfielder Marco Verratti with what looks like a knock to his left ankle.

PSG took the field wearing a shirt with a large image of Notre Dame replacing the usual sponsor's logo. "Notre-Dame" replaced the player names on the back of the shirts.

The iconic Paris cathedral was damaged in a spectacular blaze last Monday.

The club said that they would put a limited edition of the shirts on sale on line during the match for 100 euros each. The club said the money "will be donated to associations related to firefighters".

The club also posted a "Hommage to Notre Dame" video on their web site in which players praised the team-work of the Paris fire brigade and made a gesture that imitates the two famous towers that form part of the cathedral's facade.