The Frenchman increased his tally to 21 league goals this season. This is the first time he has achieved the total since 2015-16. 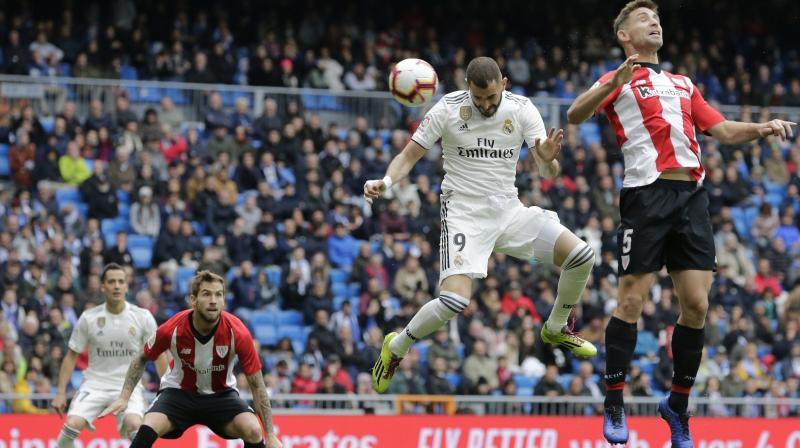 Karim Benzema netted a second-half hat-trick as Real Madrid got back to winning ways with a 3-0 victory over Athletic Bilbao in La Liga on Sunday.

The Frenchman increased his tally to 21 league goals this season. This is the first time he has achieved the total since 2015-16, and now has 10 goals in his last seven appearances for the club.

Victory left Real, who had drawn with Leganes in their last outing, in third place on 64 points. They are 13 points behind leaders Barcelona and four behind city rivals Atletico.

Zinedine Zidane once again left Gareth Bale on the bench, with Lucas Vazquez and Marco Asensio supporting Benzema in attack.

They initially cut frustrated figures throughout an opening period of few chances, with the Bernabeu crowd voicing their frustration.

However, the fans were soon serenading Benzema two minutes after the break when he opened the scoring.

Jesus Vallejo produced a brilliant last-ditch tackle on Inaki Williams and Real sprung a trademark counter attack, with Asensio leading the charge before centering for Benzema to nod in.

“We all know how good Karim is and what he brings to the side, whether he’s scoring or not,” team mate Marcelo told BeIN Sports.

“He’s one of our leaders. I’m delighted with the goals but I know Karim will be more happy with the fact we have won. We really needed a win more than simply just scoring goals.”

He doubled his tally 15 minutes from the end, heading in Luka Modric’s corner after a calamitous misjudgement from Bilbao goalkeeper Iago Herrerin.

Substitute Brahim Diaz went close for the home side in the closing stages before Bale chipped a one-on-one over the bar.

The Welshman made amends moments later, latching onto another error from Herrerin, who had rushed out of his box in an attempt to clear the through ball.

His weak header dropped at the feet of Bale, who teed up Benzema to complete his hat-trick by firing into an empty net.

“It’s always tough at the end of the season when you’re not playing for anything. We need to always get up for these games,” Marcelo added.

“The first-half was tough, but we showed face and we were much better after the break than in the first period.”

Bilbao have 46 points and stay seventh, three points behind Valencia, who play Real Betis later on Sunday in the final Europa League spot.