Concurrent organisation of matches will inevitably draw comparisons of the two leagues’ quality. 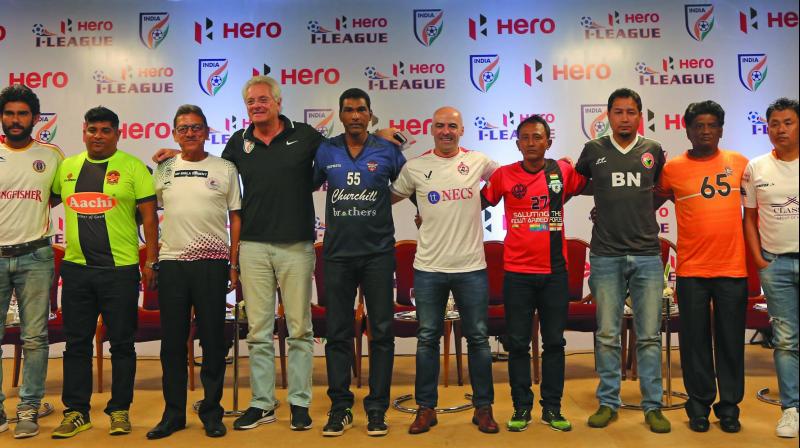 I-League coaches at an event in New Delhi.

New Delhi: Brand I-League’s battle for relevance will be modified to one of sustenance once the tournament’s 11th edition kicks off on November 25, drawing focus on the All India Football Federation’s ‘unique formula’ of solving its domestic structure imbroglio by organising two top tier leagues simultaneously.

The two-league system may be temporary with the AIFF seeking Fifa’s assistance to prepare a composite league structure, but it’s the immediate future of its ‘two babies’ that compels attention.

Concurrent organisation of matches will inevitably draw comparisons of the two leagues’ quality.

Reducing foreign players’ participation per match by a rung to five, coupled with signing the country’s ‘top’ 50-60 players may have helped the glamorous ISL grab greater public attention.

But scratch the surface and its soft underbelly was laid bare by disappointing performances of teams in its first week.

Forced to sign ‘second stringers’, I-League clubs were coerced into signing young players, after disregarding them for years.

Though the quality of action remains to be seen, the move forced the 10 participating clubs to focus on young players, handing them an opportunity to excel.

Hiking number of foreigners by one to five per match may, however, limit their opportunities.

The AIFF’s insistence on I-League’s relevance in face of ISL’s growing influence wasn’t lost on anybody at the former’s launch ceremony here on Tuesday.

“Officially, the I-League is the top league of the country. Its winner gets to play in the Champions League qualifiers, though the money in ISL is much more,” AIFF general secretary Kushal Das said.

Matches, most of them kicking off at 2pm, will be beamed live, ahead of prime time (5.30 and 8pm) slots for ISL games, which may hamper TRPs, though Das differed from the general view.

Commanding attention also will be Indian football’s Big Two, Mohun Bagan and East Bengal, stuck in the ‘foster’ league after protracted negotiations failed for an outright entry in the ISL over a `15 crore “franchise fee” in view of their storied legacy.

Mohun Bagan coach Sanjoy Sen was hardly perturbed by it or the absence of big names, barring Haitian star Sony Norde, in his squad.

“So far in ISL, none have impressed. So talks Mohun Bagan are weakened by the absence of so-called top players or I-League being weaker than the ISL hardly arise,” Sen told this paper.

“Players may come and players may go but the system remains the same. How new players adapt to the Mohun Bagan system will be key.”

East Bengal coach Khalid Jamil’s echoed Sen’s opinion, aware of the weight of expectations to end their 14-year league drought, though wiser after winning it with Aizawl last season.