Dutch teenager Zirkzee scored with his first touch of the ball in the 85th minute. 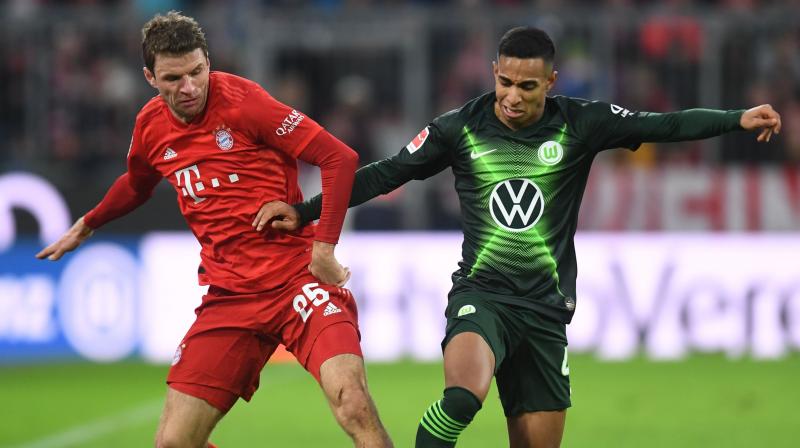 Bayern Munich’s Joshua Zirkzee and Serge Gnabry scored late goals to give them a 2-0 win over VfL Wolfsburg at the start of the winter break on Saturday as RB Leipzig sealed the unofficial autumn champions title with a comeback victory over Augsburg. (Photo:AFP)

BERLIN: Bayern Munich’s Joshua Zirkzee and Serge Gnabry scored late goals to give them a 2-0 win over VfL Wolfsburg at the start of the winter break on Saturday as RB Leipzig sealed the unofficial autumn champions title with a comeback victory over Augsburg.

Dutch teenager Zirkzee, who also netted in stoppage time in their 3-1 midweek win over Freiburg, scored with his first touch of the ball in the 85th minute.

He slotted in three minutes after coming on as a substitute for Philippe Coutinho and Gnabry doubled the lead in the 89th to lift Bayern to 33 points in third place.

“It was by no means our best game today,” Bayern interim coach Hansi Flick, whose future at the champions’ bench will be decided in the winter break, told reporters.

“Wolfsburg defended really well and closed all the spaces really well. I am just proud of the team. They deserved the victory just like they did in the previous few games. They believed in it until the end.”

Winners of the last seven league titles, the Bavarians were again wasteful with their chances in a one-sided first half, Coutinho, Gnabry, Robert Lewandowski and Thomas Mueller all going close.

The hosts had to take off injured Javi Martinez before halftime but they again dominated after the break while proving ineffective in their finishing until the introduction of Zirkzee.

The teenager has quickly made a name for himself and, with the team’s injury list growing, could be in for more playing time after the break is completed in mid-January.

RB Leipzig went top with a 3-1 win at home to Augsburg, coming from a goal behind to clinch the three points and secure the autumn bragging rights for the first time in the club’s brief Bundesliga history.

Leipzig needed second-half goals from Konrad Laimer, Patrik Schick and Yussuf Poulsen to grab victory and move on to 37 points, two clear of Borussia Moenchengladbach, who only managed a point with a 0-0 draw at Hertha Berlin.

Schalke 04 remained in fifth place on 30 after their 2-2 draw against Freiburg while Bayer Leverkusen moved up to 28 and into sixth after ending their year on a high, with a 1-0 win at Mainz 05 thanks to Lucas Alario’s stoppage-time winner.