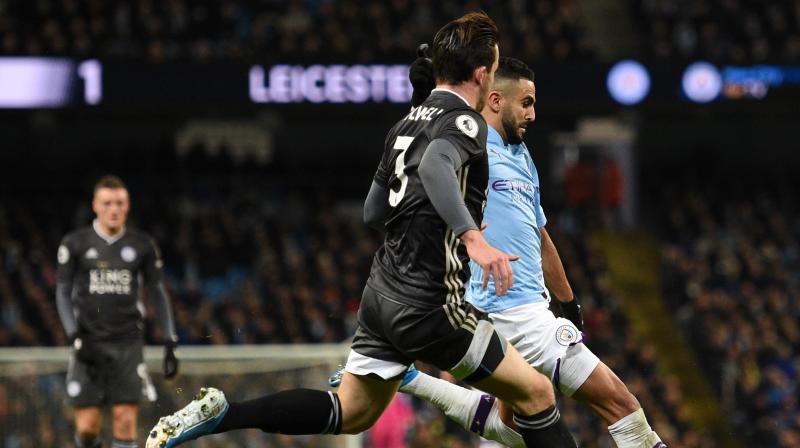 Goals from Riyad Mahrez, Ilkay Gundogan and Gabriel Jesus gave Pep Guardiola's side a win that moved them within 11 points of Liverpool, who don't play this weekend due to their involvement in the Club World Cup. (Photo:AFP)

London: Manchester City hit back to beat Leicester 3-1 as the champions kept alive their faint hopes of catching Premier League leaders Liverpool, while Carlo Ancelotti and Mikel Arteta got a glimpse of the problems that lie ahead as Everton and Arsenal shared a dreadful 0-0 draw.

City have been left trailing in Liverpool's wake this term and a defeat against second-placed Leicester would have been a fatal blow to their bid for a third successive title.

But goals from Riyad Mahrez, Ilkay Gundogan and Gabriel Jesus gave Pep Guardiola's side a win that moved them within 11 points of Liverpool, who don't play this weekend due to their involvement in the Club World Cup.

"I'm delighted with the way we played. We created a lot. We kept going forward and played balls so simply," Guardiola said on Saturday.

"Kevin De Bruyne was incredible. He won the game for us. His commitment is incredible. He's a spectacular player." Jamie Vardy had punished City's defensive weakness against the counter-attack with a breakaway opener in the 22nd minute.

Liverpool, chasing a first English title since 1990, have a game in hand to bolster their lead and also face Leicester on Boxing Day.

"To come here against that level of opponent was a good lesson for us. It shows that there's a long way to go for this group," Leicester manager Brendan Rodgers said.

Both bosses were in the Goodison Park stands with Duncan Ferguson and Freddie Ljungberg in temporary charge of Everton and Arsenal for the final time.

And the lack of confidence of two sides struggling at the wrong end of the table was obvious in a match completely devoid of quality.

A point leaves Arsenal 11th and the Gunners have now won just once in their last 13 games in all competitions.

Everton move up to 15th, but are only four points clear of the relegation zone. Ferguson's role in Everton's impressive victory over Chelsea and draw at Manchester United in their last two league games was enough to ensure the Scot a role in Ancelotti's backroom staff.

"What a fantastic performance we put in. I couldn't have asked for any more from them, they've been incredible for me," Ferguson said.

On Ancelotti, Ferguson added: "A guy of that pedigree coming here, I can't wait to start working under him."

Southampton climbed out of the relegation zone at the expense of Aston Villa, who have now lost their last four league games.

Danny Ings struck for Southampton in the 21st minute at Villa Park, the in-form striker pouncing after Shane Long's shot was saved to net his 12th goal of the season and his sixth in his last seven games.

Ings wrapped up Southampton's first win in three games when he punished Marvelous Nakamba's poor defending in the 51st minute.

Despite having two goals ruled out after VAR reviews, Sheffield United climbed to within one point of the top four as Oli McBurnie's 23rd minute strike clinched a 1-0 win at Brighton.

Wolves moved into sixth place as they fought back for a 2-1 win at second bottom Norwich.