With the Premier League title race effectively over, the battle is for a place in Champion League 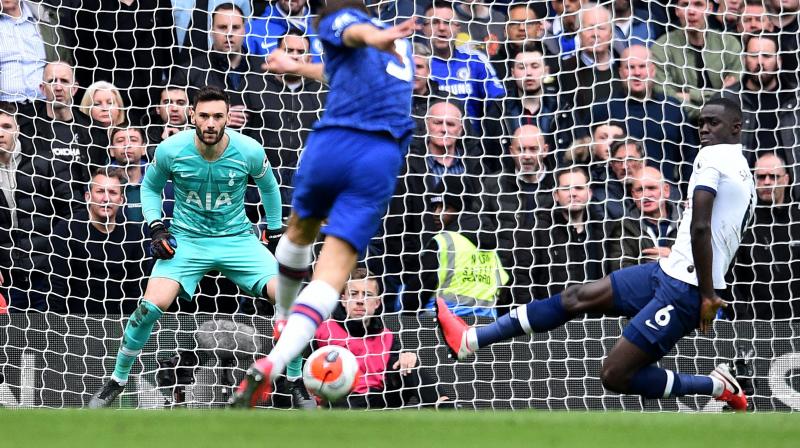 London: Chelsea strengthened their grip on a Premier League top-four place by beating London rivals Tottenham 2-1 and Manchester City edged past Leicester despite another attack of penalty jitters.

Sheffield United will rue missing out on the chance to clamber above Tottenham into fifth place after drawing at home to struggling Brighton last night.

Liverpool's staggering 19-point lead over second-placed Manchester City means the title race is effectively over, with much of the focus turning to the scramble to qualify for next season's Champions League.

Frank Lampard's fourth-placed Chelsea went into their match against Jose Mourinho's Spurs at Stamford Bridge without a win in their past four Premier League matches and just one point clear of Spurs.

Fringe players Olivier Giroud and Marcos Alonso were recalled by Lampard and both rewarded their manager's confidence by scoring in the home win.

The result means Lampard has completed a league double against his former boss this season after their 2-0 victory at the Tottenham Hotspur Stadium in December.

But the match was overshadowed by a VAR controversy, with officials ruling that Tottenham midfielder Giovani Lo Celso did not deserve to be sent off for a "leg breaker" stamp on Cesar Azpilicueta.

World Cup winner Giroud put Chelsea ahead in the 15th minute when he reacted quickest to finish beyond Hugo Lloris after Ross Barkley had struck a post.

Chelsea doubled their advantage three minutes into the second half, Alonso drilling in a first-time shot after being set up by Barkley.

Alonso's free-kick hit the bar before Antonio Rudiger deflected Erik Lamela's shot into his own net in the 89th minute to give Spurs late hope.

Lampard criticised VAR after Lo Celso was allowed to stay on the pitch.

"I hate to call for red cards but that is a leg breaker," he said.

"Everybody knew they made a mistake. I was just waiting for the red card to be shown."

Adding to Lampard's frustration, television broadcaster BT Sport reported that VAR officials had told them Lo Celso should have been sent off.

As it stands, a fifth-placed finish could guarantee Champions League football next season because Manchester City have been banned from Europe's elite competition for two years.

City hope to have their appeal against the ban heard by the Court of Arbitration for Sport before the start of next season.

City have failed to score from each of their past four penalties, with each spot-kick being missed by a different player.

But they bounced back to see off Leicester and the 1-0 win leaves them seven points clear of their opponents, cementing their position in second place.

Jamie Vardy will rue hitting the post early in the match and Leicester had two penalty appeals turned down in an engaging contest.

"We have missed four penalties in a row but maybe we will shoot a penalty when we need it to win something," Man City coach Pep Guardiola told the BBC.

"The keepers are good too, but the next one we are going to score."