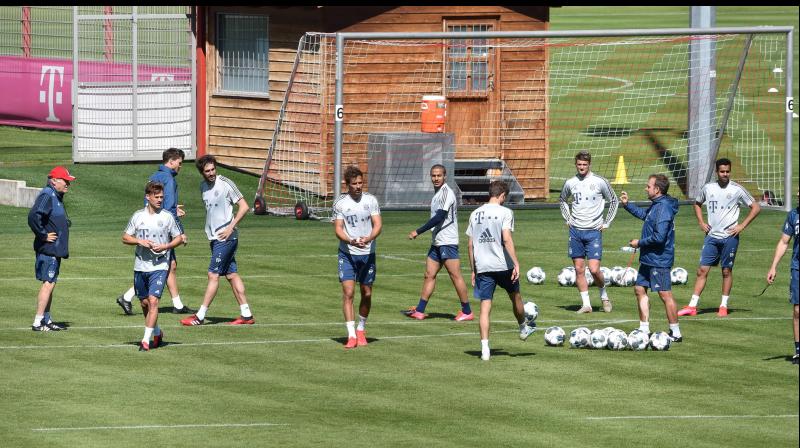 Bayern Munich's players and coaches gather for a training session at the team's training grounds in Munich, southern Germany, on Wednesday. AFP Photo

Berlin: German league football is ready to resume without spectators on May 9 but the final say rests with political leaders, the Bundesliga's chief executive said Thursday.

Following a meeting with Germany's top clubs, Christian Seifert said the league was "ready" to return next month, which would make it the first major European football competition to do so.

Seifert stressed though that the final decision lay with Chancellor Angela Merkel's government and state leaders. "It is solely down to what the political leaders decide," Seifert said in a video press conference.

"The Bundesliga is ready -- regardless of whether it can continue on 9 May or at a later date."

The season in Germany was halted on March 13 in a bid to prevent the virus spreading. Germany has been less affected by the coronavirus pandemic than other European countries, partly due to mass testing.

But the move to allow players back onto the pitch is being treated with caution and Seifert stressed that hygiene precautions would have to be observed.

The players must be tested regularly and hygiene officers would be appointed to each team to ensure the guidelines are followed.

"Games without spectators are not what we want, but they seem to be the only feasible way," said Seifert. "We try to take the best possible precautions through certain measures."

The Bundesliga CEO said only around 200 people will be allowed in the stadium for each game, including players, coaches, officials and media.

It is planned that the league season will finish by June 30, which would free up around 300 million euros ($323 million) in television money, an essential boost for several cash-strapped clubs.

According to DFL calculations, around 22,000 tests, for players and club staff, will be needed to complete the league season.

However, scientists at the Robert Koch Institute, which advises the government, and numerous health experts are sceptical about the testing of footballers in the midst of the pandemic.