Masterminding one of the greatest upsets in sporting history wasn't enough for Claudio Ranieri to keep his job at Leicester. 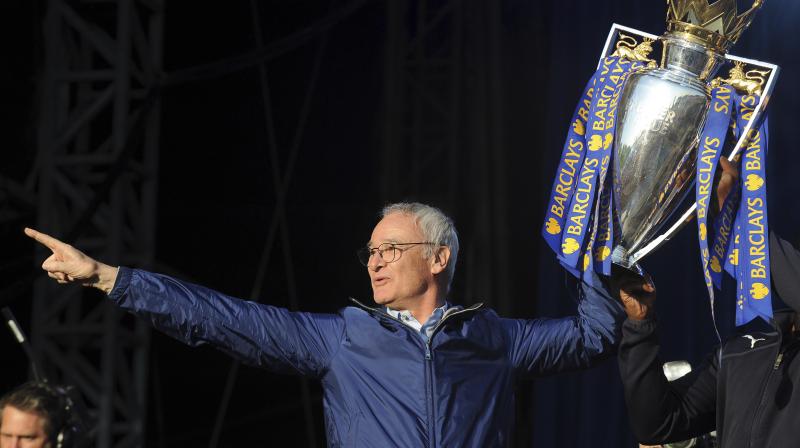 Claudio Ranieri was fired by Leicester, nine months after the 65-year-old Italian manager guided the club to the English Premier League title at preseason odds of 5,000-1. (Photo: AP)

London: Masterminding one of the greatest upsets in sporting history wasn't enough for Claudio Ranieri to keep his job at Leicester.

Ranieri was fired by Leicester on Thursday, nine months after the 65-year-old Italian manager guided the club to the English Premier League title at preseason odds of 5,000-1.

Leicester's Thai owners took the drastic measure with soccer's ultimate fairytale threatening to have an unhappy ending. In a dreadful title defense, the team is one point and one place above the relegation zone and in serious danger of losing its status in the world's most lucrative league.

"We are duty-bound to put the club's long-term interests above all sense of personal sentiment," Leicester vice chairman Aiyawatt Srivaddhanaprabha said, "no matter how strong that might be."

On current form, Leicester is heading for relegation with 13 games left. It hasn't scored a goal in six league games in 2017 and has won one of its last 10 games in the league.

The team was eliminated from the FA Cup last weekend by third-tier team Millwall, which won 1-0 despite playing most of the second half with 10 players.

"His status as the most successful Leicester City manager of all time is without question," a long club statement said of Ranieri.

"However, domestic results in the current campaign have placed the club's Premier League status under threat, and the board reluctantly feels that a change of leadership, while admittedly painful, is necessary in the club's greatest interest."

Leicester, with a team of journeymen, cast-offs and previously unheralded players, won the Premier League by 10 points, a feat widely viewed as one of the greatest in all sports.

Ranieri was last month voted as FIFA coach of the year, and the Leicester story captured the hearts of the sporting world and beyond.

However, the values behind Leicester's surprise success - hard work, attitude, team spirit - have disappeared as Leicester slipped closer to the bottom three in the Premier League and its star players, including Jamie Vardy and Riyad Mahrez, failed to rediscover the form of last season.

Ranieri has come under heavy pressure in recent weeks and reportedly fell out with some of his players. The club qualified for the last 16 of the Champions League with a game to spare in the group stage - it lost 2-1 to Sevilla in the first leg on Wednesday - but even the potential prospect of reaching the quarterfinals of Europe's most illustrious competition hasn't saved Ranieri.

"After all that Claudio Ranieri has done for Leicester City, to sack him now is inexplicable, unforgivable and gut-wrenchingly sad," former Leicester and England player Gary Lineker tweeted.

Leicester could be in the Premier League's relegation zone by the time the team plays its next match, at home to Liverpool on Monday. Assistant manager Craig Shakespeare and first-team coach Mike Stowell have been placed in temporary charge of the side.

Ranieri was hired by Leicester in July 2015, joining a club that escaped relegation the previous season thanks to a run of seven wins and a draw from its last nine games. Many criticized the appointment of Ranieri because of his disappointing record in his most recent job, as coach of Greece.

He made an instant impact, though, winning the league in his first season as English soccer's supposed heavyweights found no answer to Leicester's counterattacking style and unwavering team spirit. Ranieri charmed the media with his unique phrases and lovable personality.

"His warmth, charm and charisma have helped transform perceptions of the club and develop its profile on a global scale," Srivaddhanaprabha said. "We will forever be grateful to him for what he has helped us to achieve."

Leicester wasn't expected to repeat last season's feats but neither was the club expected to be battling against relegation, not after twice breaking its transfer record in the offseason to bolster the squad.

The departure of N'Golo Kante to Chelsea hit the team hard, robbing Leicester of its midfield rock and exposing its aging defense. Complacency also seems to have set in.

Whatever Ranieri attempted to turn things around - a change of tactics, formation, personnel - didn't come off. Leicester's board issued a statement 16 days ago, making "absolutely clear its unwavering support for Ranieri," but the threat of relegation was too strong.

"We are now faced with a fight to reach that objective (of staying up)," Srivaddhanaprabha said, "and feel a change is necessary to maximize the opportunity presented by the final 13 games."