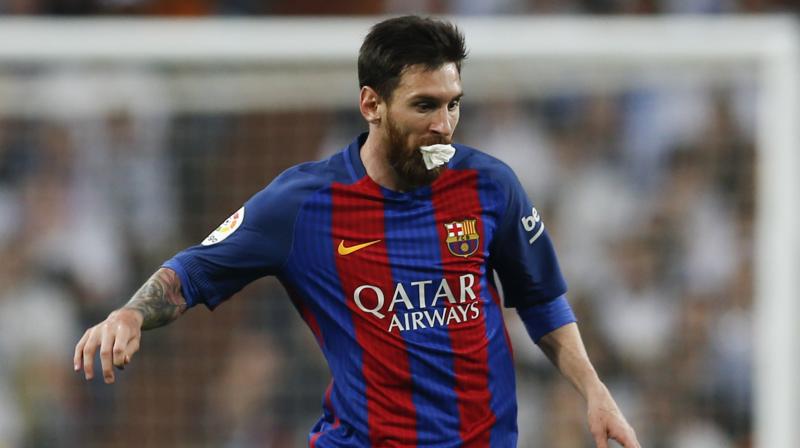 Lionel Messi's second goal of the night was his 500th for Barcelona and took the Catalans to the top of La Liga. (Photo: AP)

Messi's second goal of the night was his 500th for Barcelona and took the Catalans to the top of La Liga.

"He is the best player for me in history and I have seen a lot of football," said Enrique.

"In modern football when everyone is tactically and physically better he still makes the difference.

"The fact he has scored his 500th goal shows all of us as Barca fans are lucky to have him identified with the club."

The timing of Messi's strike also saw Barca gain revenge for Sergio Ramos's stoppage time equaliser in a 1-1 draw when the sides last met back in December.

"It is marvellous for us to win in the 92nd minute. It is something that is normally more a characteristic of our rivals, but we like to do it too," added Enrique.

Barca lead at the top of the table thanks to their better head-to-head record. Madrid, though, still have the advantage as they have a game in hand.

"To score in the 92nd minute is a huge confidence boost," said Enrique, who will leave the club at the end of the season.

However, he and Barca captain Andres Iniesta called on Messi, whose contract expires at the end of next season, not to follow him in leaving the Camp Nou.

"Barca is an incredible club with many years of history, but without doubt an important part of that history is Leo Messi," Enrique said.

"I think the great thing about Leo is that he continues to surprise," said Iniesta.

"After so many years he is still decisive. It is an honour and a blessing for the club to have him."

By contrast, Real Madrid boss Zinedine Zidane was left to lament his side's over adventurous nature after conceding in stoppage time after being reduced to 10 men.

Messi had cancelled out Casemiro's opener before half-time.

But Barca looked well on the road to victory when Ivan Rakitic's stunning effort put the visitors 2-1 in front before Madrid captain Sergio Ramos was sent off for a wild lunge on Messi.

However, Madrid rallied when a man down as substitute James Rodriguez fired home an equaliser four minutes from time.

"Drawing the game with 10 men, to press high up the field is dangerous and we paid for that," said Zidane.

"I can't criticise the players for anything though. We gave our all, but we didn't manage to get the three points.

"We didn't deserve to lose, but that is football."

Madrid now need to take at least 16 points from their final six La Liga games to be guaranteed the title.

"There will be much more of a title race, but it is still in our own hands," added Zidane.

Madrid were also dealt a fresh injury blow for the remainder of their league season and upcoming Champions League semi-finals against Atletico Madrid as Gareth Bale faces another spell on the sidelines.

"I don't regret anything," said Zidane over his decision to start Bale.

"I am disappointed for him. He started the game well and then the injuries we can't control.

"We will see what exactly the injury is and hope it is as little as possible."