After a turgid first half, Barcelona stepped up a gear in the second and midfielder Carles Alena sent the Catalans ahead after 54 minutes. 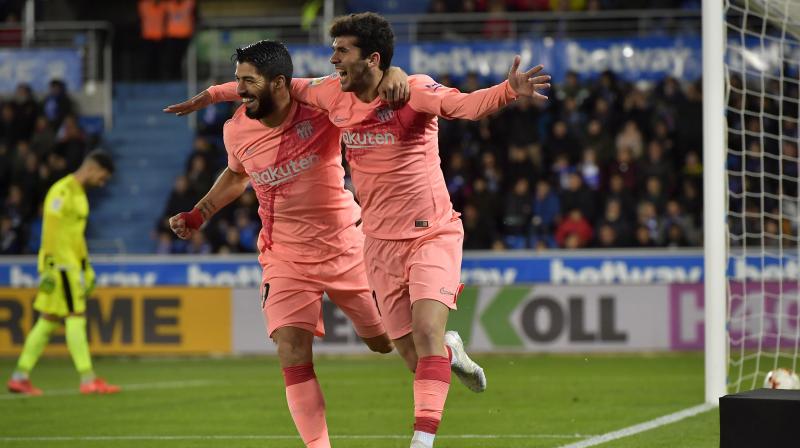 With one eye on next week’s Champions League semi-final against Liverpool, Ernesto Valverde picked a side with players like Lionel Messi, Jordi Alba and Arthur on the bench. (Photo: AP)

Barcelona:  Barcelona have one hand firmly on the La Liga title after winning 2-0 at Alaves on Tuesday, leaving them 12 points clear at the top of the table with four games to play.

Should second place Atletico Madrid lose at Valencia on Wednesday or against Real Valladolid on Saturday, Barcelona will be champions before they face Levante that evening.

With one eye on next week’s Champions League semi-final against Liverpool, Ernesto Valverde picked a side with Lionel Messi, Jordi Alba and Arthur among other regular starters, on the bench.

After a turgid first half, Barcelona stepped up a gear in the second and midfielder Carles Alena sent the Catalans ahead at Mendizorroza after 54 minutes.

Arturo Vidal and Sergio Roberto combined well, the latter threading a pass through to Alena which Luis Suarez cleverly stepped over, allowing the 21-year-old to coolly slot home.

Suarez added the second from the penalty spot after Tomas Pina’s handball was spotted by VAR, putting Barcelona in touching distance of their 26th league title.

Samuel Umtiti bundled home from an offside position but after VAR ruled out the defender’s goal, the handball by Pina was penalised.

Valverde brought on Messi, Alba and Arthur in the final stages to help Barcelona see the game out, with title celebrations poised for Saturday, or sooner. Alaves are eighth.

“We started well, we could have gone ahead in the first half,” said Alena.

“It took a superb move (to break through), a great ball by Sergi that Luis left for me. He saw me coming behind him and he’s such a world class player that he was aware of my movement."

“Let’s wait and see what Atletico do tomorrow. If they fail, we’re champions. I think we deserve this title, we’ve been the best team.”

Earlier, Huesca beat Eibar 2-0 to move 19th, while Real Valladolid climbed to 15th with a 1-0 win over Girona, leaving their visitors in 17th place.