Long snatched the record from former Tottenham defender Ledley King, who scored after 9.9 seconds against Bradford in 2000. 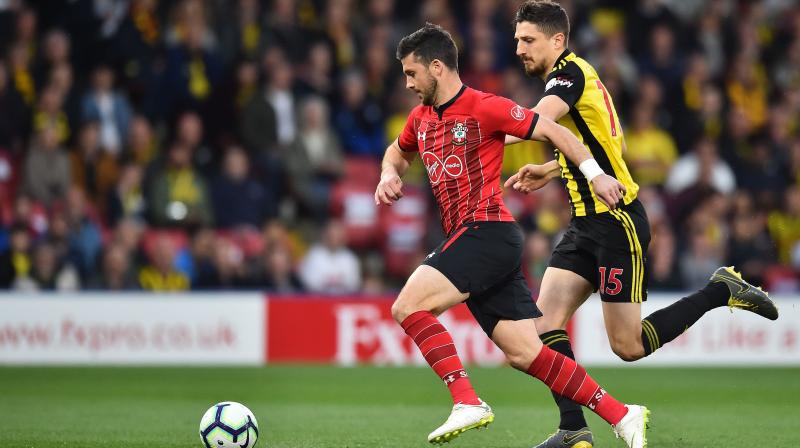 Southampton is on 37 points, six ahead of 18th-placed Cardiff City, who occupy the final relegation slot, with three games remaining. (Photo: AFP)

Southampton striker Shane Long struck the fastest goal in Premier League history, inside seven seconds, but his team conceded a last-minute equaliser as they drew 1-1 at Watford on Tuesday.

The draw leaves the Saints still with work to do to guarantee their Premier League survival. Southampton is on 37 points, six ahead of 18th-placed Cardiff City, who occupy the final relegation slot, with three games remaining.

It should be enough for Ralph Hasenhuttl’s side, especially after 17th-placed Brighton lost 1-0 at Tottenham on Tuesday, to fall three points behind Southampton.

But the reaction of the Saints players, who fell to the floor at the final whistle, reflected the bitter blow of conceding an Andre Gray goal in the 90th minute.

Irish striker Long wrote his name in the record books when he charged down a Craig Cathcart clearance before running through on goal and lobbing the ball calmly over goalkeeper Ben Foster.

Long snatched the record from former Tottenham defender Ledley King, who scored after 9.9 seconds against Bradford in 2000.

Southampton could have had a second before the break when Nathan Redmond struck the post after breaking into the box on the right.

Watford keeper Ben Foster also produced a fine save to keep out a James Ward-Prowse free-kick aimed at the bottom corner and keep the lead to a single goal.

But Watford striker Gray, who had gone close twice only to be foiled by Saints keeper Angus Gunn, pounced on a loose ball to find the target from close range in the final minute of normal time.

Watford moved above Everton into seventh place to keep up their hopes of qualifying for the Europa League. The Hornets are also in the FA Cup final against Manchester City.

Southampton’s remaining fixtures are at home to Bournemouth, away to West Ham United and at home to already-relegated Huddersfield.