Sunil Chhetri, busy being a pundit on Football Extraa, talks about who he thinks will win. 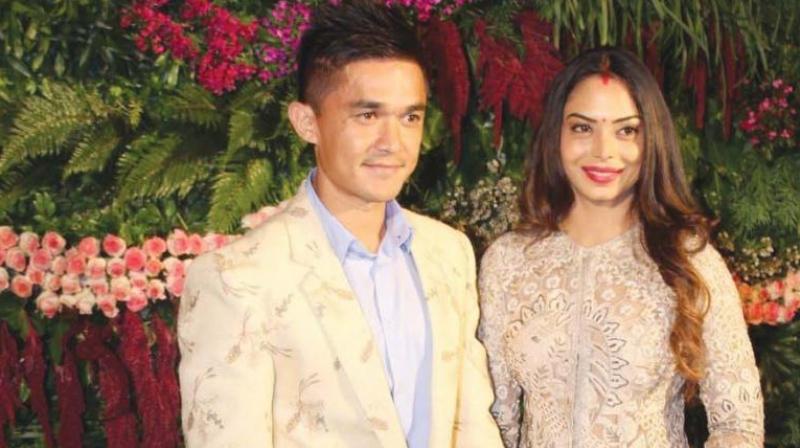 Sunil with his wife Sonam Bhattacharya

The Bengaluru FC skipper is as passionate as he is dedicated. After his plea to Indian fans to watch the Indian team’s matches at the Hero Intercontinental Football Cup, which saw the turnout at the stadiums rise in numbers, Chhetri is onto the biggest football event in the world, the FIFA World Cup 2018. The die-hard believer of the beautiful game who was responsible for India’s win with his playmaking and striker capabilities is on the special World Cup show Football Extraaa with a star studded expert panel which include Baichung Bhutia, Ashley Westwood, Spaniard Luis Garcia, Frenchman Louis Saha and ex-England goalkeeper David James on Sony Ten. Chhetri is seen trading witty remarks with the knowledgeable Joe Morrison, while asking provocative questions, in his itinerant style which has Joe on the edge! Chhetri, when asked about his favourite team for the World Cup after many of the biggies have floundered or failed, the most recent being Argentina’s pummelling by the attacking Croatian squad, said, “What I’m looking forward to at the World Cup is: This could be the swansong for so many legendary footballers and I’m simply relishing the prospect of watching these guys as much as possible before they call it a day. I’m also keen to see how Brazil bounces back from its 2014 debacle and whether France is actually as good as they look on paper!”

The footie champion recently also posted a heartfelt message for his dad on father’s day, “This Father’s Day, I have a special message for my dad and all the #UnstoppableDads out there. Tag your dad to thank him for the inspiration he truly is. Join the #Unsto ppableDads movement #Happy FathersDay.”

Sunil is an Espana supporter and loves the flair of the team’s tiki-taka. He added about La Roja, “The team I’m backing and why is a tough choice but I’m going to go with Spain. They play some fantastic possession-based football and I’m a fan of their style.”