Sunil Chhetri, Udanta Singh and Lenny Rodrigues scored a goal apiece for the home side. 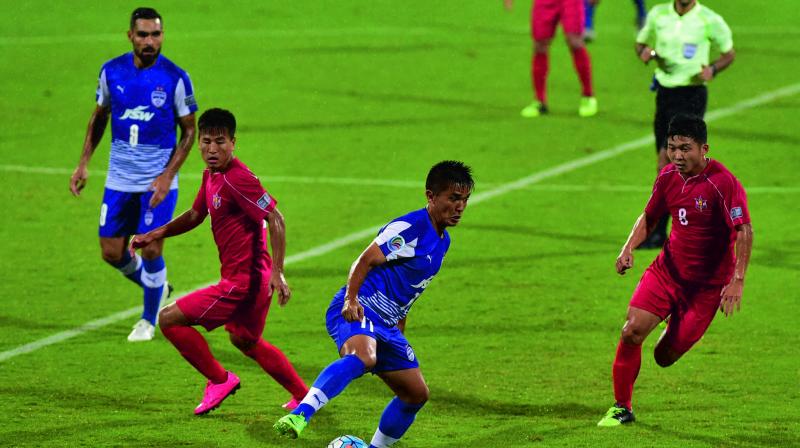 BFC skipper Sunil Chhetri in action during the match against 4.25 SC in Bengaluru. (Photo: Shashidhar. B)

Bengaluru: In the end it was as entertaining as they come! The torrential downpour in the second half set the stage for some unpredictable and unusual football in the last half hour but Bengaluru FC made sure that they head to North Korea with something to spare even before the heavens opened up, clinching a 3-0 win over 4.25 SC in the AFC Cup inter-zonal semi-final at the Sree Kanteerava Stadium on Wednesday.

Sunil Chhetri, Udanta Singh and Lenny Rodrigues scored a goal apiece for the home side. Albert Roca opted for a 4-3-3 formation with Rahul Bheke in central defence, Erik Paartalu and Dimas Delgado in midfield and Antonio Dovale all making their debut along with Gurpreet Singh Sandhu in goal.

The hosts started stronger, with Udanta getting a shot away straight from kickoff, before the visitors grew into the game after 10 minutes even forcing Harmanjot Khabra to make a timely interception inside the box to save his side. 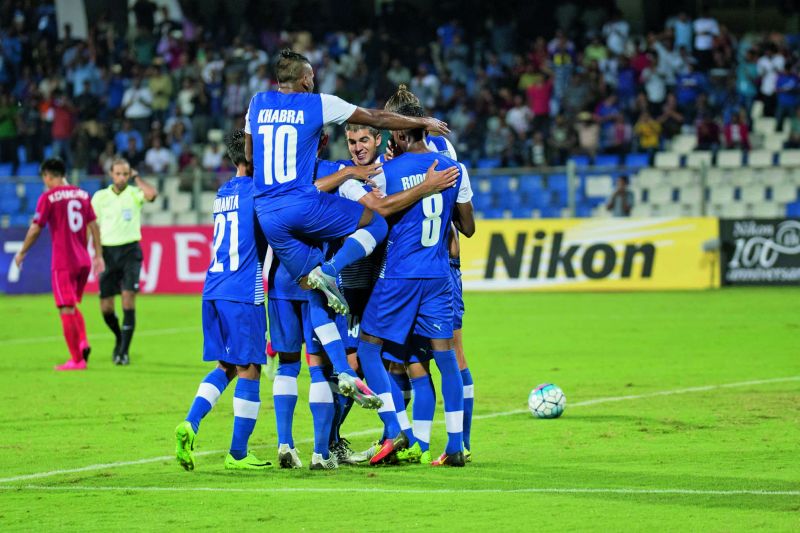 The North Korean side focused their attack mostly on the right flank choosing to target Nishu Kumar whose positioning was often questionable. The home side, however, weathered the onslaught with Chhetri dropping deep and Paartalu moving over to this side to cover.

At the other end, there were some good moves as Chhetri tried to pull off a one-two with Udanta before Delgado’s run behind the defence was smothered by Ri Kang in goal.

The goal came just after the half hour mark when Khabra nodded an aerial ball into the path of Udanta. The striker, tearing towards the ball, was brought down by the keeper rather dimly allowing Chhetri to step up and chip the ball into goal to put his side ahead.

The captain could have doubled the lead 10 minutes later. Breaking the offside trap, Chhetri showed his skills by controlling the ball on his chest, turning and chipping the ball from outside the box only for the keeper, backpedaling frantically, to touch it beyond the post.

The second half started with the travelling side showing signs of life as substitute striker Kim Yu Song, struggling with a back injury, stung Gurpreet’s hands with a good effort.

But all hopes of a comeback was stopped in its tracks six minutes into the half when a wayward pass found Udanta, who anticipating the move, stole the ball before advancing and tucking his shot calmly into the bottom corner.

The torrential downpour then made it tough for the players with the ball often stopping short and bouncing awkwardly. Despite the conditions, BFC found the third when Rodrigues turned in a Chhetri cross 12 minutes from time.