In fact, the 26-year-old clicked the photo when she visited the club's dressing room. 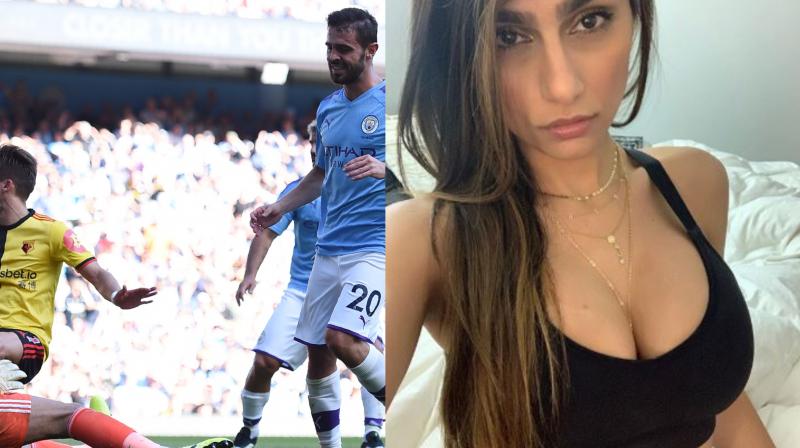 The champions overcame their 3-2 defeat to Norwich by annihilating Watford 8-0 to become the first side to score five goals in the first 18 minutes of a Premier League game.

City began their goal fest after David Silva finished off a delicious pass from Kevin De Bruyne during the first minute, followed by a Sergio Aguero’s 100th Premier League goal. City doubled the lead after Aguero converted a penalty into a successful goal.

Pep Guardiola’ side added the third goal after Riyad Mahrez netted a wonderful free kick, which ultimately curled into the back of the net in the 12th minute, along with a Bernardo Silva header and Nicolas Otamendi tap-in in the 18th minute to complete a 5-rout before the half time.

After conceding five goals in the first half, the visitors brought on an extra defender to control the damage done, but their tactics failed to click as the home side added the sixth goal after Bernardo Silva netted the sixth goal in the 46th minute.

Bernardo Silva netted in from a close-range to add the seventh and complete his maiden hat-trick in the top-flight league, before De Bruyne added the last one to make it 8-0. Manchester City nearly came close to breaking Manchester United’s record of 9-0 win against Ipswich Town in 1995.

After Watford’s 8-0 thrashing, the visiting side’s goal-keeper Ben Foster stated, “It’s probably a bit of shock, embarrassment,” Watford’s Foster said. “I think we let ourselves down today and the fans a bit. We on the pitch didn’t give it all we have got.”

After Watford’s humiliating defeat, Mia Khalifa took to twitter and show her concern. Mia tweeted, "Damn, @WatfordFC, y'all need me back?." Along with the tweet, she posted a picture of herself wearing the club’s jersey.

In fact, the 26-year-old clicked the photo when she visited the club's dressing room. Nevertheless, the sports commentator has also indicated that Watford would’ve have been lucky had she been at the Stadium.

Khalifa said that due to her presence, the match got tied at 2-2. After Mia Khalifa posted the pictures on instagram, few fans got upset, and questioned her loyalty towards West Ham.

@sportsbet.io made this insane experience possible, I can’t believe I had the chance to see first hand Watford play Arsenal, even though it was a draw, it was ELECTRIC. I saw firsthand today the power of Bitcoin, and I’ve decided now that yellow is officially my color. From being able to purchase the jersey I’m wearing, a seat in the box, to buying a personalized message on the billboard at the pitch, bitcoin and @sportsbet.io makes it all possible for the community. #Sponsored

Nevertheless, the former adult actress, who, in 2018, admitted that she is a self proclaimed fan of West Ham United, must have been happier after her side defeated the 20-time Premier League Champions Manchester United by 2-0.