He was instrumental in the Mumbai-based franchise’s first ever qualification to the play-offs. 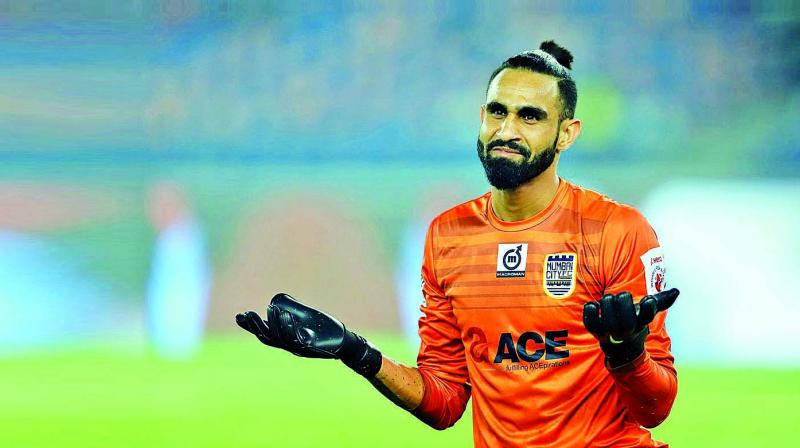 Last season, unlike their first two seasons, wasn’t good for the Ranbir Kapoor co-owned franchise as they finished seventh.

Amrinder Singh joined Mumbai City FC late during season 3 of the Indian Super League, but he made an immediate impact by keeping five clean sheets in the six games he played to win the Golden Glove Award. He was instrumental in the Mumbai-based franchise’s first ever qualification to the play-offs.

Last season, unlike their first two seasons, wasn’t good for the Ranbir Kapoor co-owned franchise  as they finished seventh. But this season (ISL-5) Amrinder has been a safe bet in the goal and has been one of the reasons for the team’s resurgence after a disappointing start.

The Jorge Costa-coached side had just one win in four games and were fresh from a 5-0 away loss to Goa. But like champions, they didn’t loose hope and have made a strong comeback by remaining unbeaten in the following eight games with six wins.

“Coach told us to focus after the 5-0 loss and not let that disappointment get into our minds. He and we believed that we can do well. He knew this team wasn’t like what we performed on that day. It was difficult to comeback after such a loss but coach’s role was important in not changing the team's atmosphere and encouraging us to do well,” Amrinder Singh told this paper on Thursday.

Mumbai has conceded just four goals in those eight games and they punished Kerala Blasters 6-1 on December 16 before dispersing for more than a month-long international break for India’s participation in AFC Asian Cup in UAE.

Amrinder who was also part of the Indian squad for the Asian Cup, admitted it will be difficult for his team to continue the winning momentum after such a long break, but he was hopeful about continuing the good work.

“For the last eight matches, we’ve been unbeaten and to continue that momentum is a bit difficult after a long break. There is some pressure to start from where we left off, but we have the confidence to do that. We joined the training camp in Goa and have been working hard to continue to do well. Coach got more time with the team and all are fit, focused and rejuvenated,” he said.

The Mumbai City’s top custodian revealed that the team’s first target is to qualify for the semi-finals. “We are targeting a top four finish. We should be able to do that as the atmosphere in the team is electric and we had pretty good training sessions. The team which is in good shape and shows  discipline will do well at home and the away leg of the semifinals,” he said.

Mumbai City meets Amrinder’s former team Bengaluru FC at the Mumbai Football Arena on Sunday and the Punjab lad is looking forward to the big clash. “I respect every team but I am here to play for Mumbai City and will give my 110 percent. I am training hard and give my best in all the matches I play. The plus point is that the defense listens to me and follow what I say to keep clarity of thought,” he said.

He, however has remained second fiddle to Gurpreet Singh Sandhu in the Indian national team and warmed the bench during the Asian Cup. But he has been part of the senior Indian team squad from AFC Asian Cup qualifiers and made three appearances for the senior team last year. He was happy with the experience.

“It has been a great experience for me. From the qualifiers itself every player had the hunger to play in the AFC Asian Cup and do well there. Wherever we sat together, be it at the dinner or breakfast table, we talked about playing in the Asian Cup,” said Amrinder.