Hazard opened the scoring after 10 minutes with a curling shot after Batshuayi had set him up. 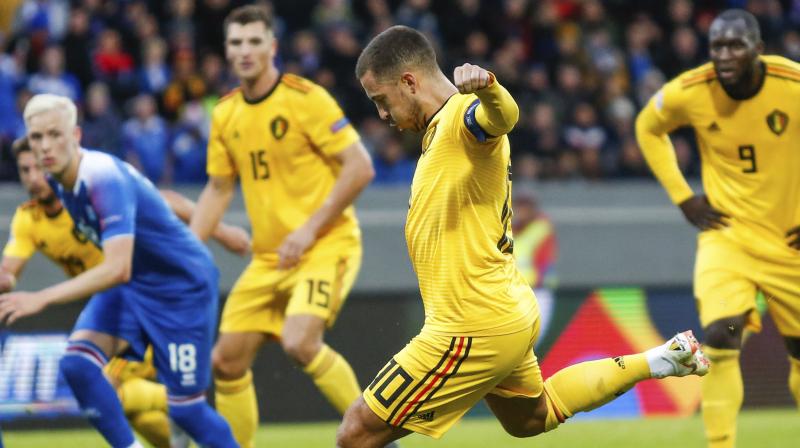 It was Hazard's 30th international goal as the 28-year-old Chelsea star became the third Belgian to reach the 100-cap mark after Jan Vertonghen and Axel Witsel. (Photo: AP)

Nicosia: Eden Hazard marked his 100th cap with an early goal to set Belgium on their way to a comfortable 2-0 away win over Cyprus in their Euro 2020 qualifier on Sunday.

Michy Batshuayi got the other goal for the top team in the FIFA rankings, who began their campaign last Thursday with a 3-1 home success over Russia and now have six points from their opening two games in Group I.

Hazard opened the scoring after 10 minutes with a curling shot after Batshuayi had set him up. It was his 30th international goal as the 28-year-old Chelsea star became the third Belgian to reach the 100-cap mark after Jan Vertonghen and Axel Witsel.

Batshuayi doubled the score eight minutes later, running on to a pass over the top of the home defence from Thorgan Hazard, knocking it past the onrushing goalkeeper Urko Pardo and sliding the ball into the empty net from a tight angle.

Belgium, without injured regulars Kevin de Bruyne, Romelu Lukaku and Witsel, cruised through the rest of the contest to stretch to 12 games their unbeaten record against the Cypriots, who had beaten San Marino 5-0 at home on Thursday in their opening qualifier.

Earlier on Thursday, Denis Cheryshev scored twice as Russia won 4-0 away in Kazakhstan for their first points of the campaign.

His first-half pair of goals were followed by two more early in the second half in Arana, from Artem Dzyuba and an own goal by Kazakh defender Abzal Beysebekov.