Back to the Arena 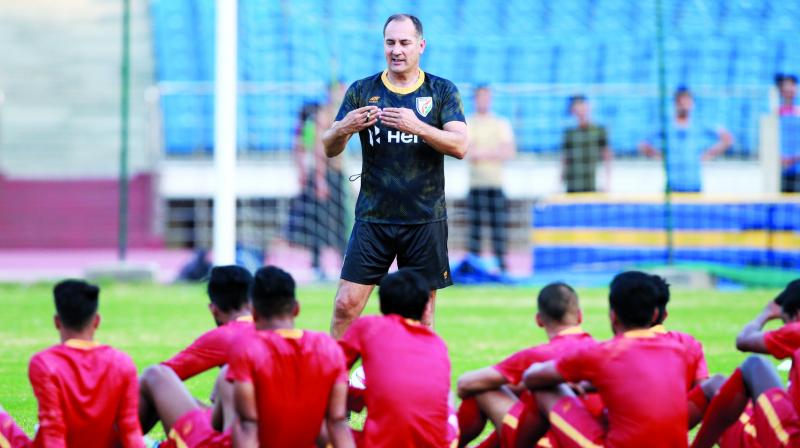 The Indian senior national team is camping in Mumbai for the first time since new coach Igor Stimac took over the reigns last month. The Blue Tigers had been camping regularly at Mumbai Football Arena under previous coach Stephen Constantine before shifting to New Delhi for training ahead of the Asian Cup in UAE that was held in January 2019.

Croatia national Stimac also held his first coaching camp in New Delhi ahead of the King’s Cup in Thailand. However, the team has assembled in Mumbai on Monday for the preparatory camp for the forthcoming Intercontinental Cup in Ahmedabad.

The Intercontinental Cup was held at Mumbai Football Arena last year from June 1 to 10. India won the tournament after defeating Kenya 2-0 in the final. The other teams included Chinese Taipei and New Zealand.

The Blue Tigers will be opening their campaign in the Intercontinental Cup in Ahmedabad next month against Tajikistan on July 7 after which India will face DPR Korea and Syria on July 13 and 16, respectively.

The Indian team had a two-week long rest after finishing third in the King’s Cup with 1-0 win over hosts Thailand on June 8. The 35-member probable squad includes local players like Rahul Bheke and Farukh Choudhary, Nikhil Poojary and Raynier Fernandes. All of these four play in the Indian Super League. While Bheke has been key defender for ISL champions Bengaluru FC, Choudhary played in forward line for Jamshedpur FC. Poojary has played his trade for FC Pune City and Fernandes is member of Mumbai City FC team.

Former Mumbai FC defender Anas Edathodika is also part of the camp after coming back from retirement he announced in January following India’s exit in the Asian Cup. The Englishman Constantine was impressed with the hospitality and facilities available in Mumbai which brought him and his team to Mumbai Football Arena on regular basis for more than a year since 2017. Whether Stimac will also fall in love with the host association - Mumbai District Football Association - remains to be seen.

Stimac has already impressed Sunil Chhetri and Co with his coaching style. He and his support staff had drawn up a schedule for every individual player during their break.

The training sessions at the MFA will be interesting for the players and onlookers from the former Croatia International player who has an impressive resume. As a player, he was part the of the Croatia national squad which finished third in the FIFA World Cup in France in 1998 and a member of the Croatia national squad which qualified for the quarterfinals of the UEFA European Championship 1996 in England.

Stimac’s major achievement as coach was Croatia’s qualification for the FIFA World Cup in Brazil in 2014. His last assignment was with Al-Shahania Club in Qatar.