Ceballos’ brace on full debut in Real’s win over Alaves keeps them seven points behind leaders. 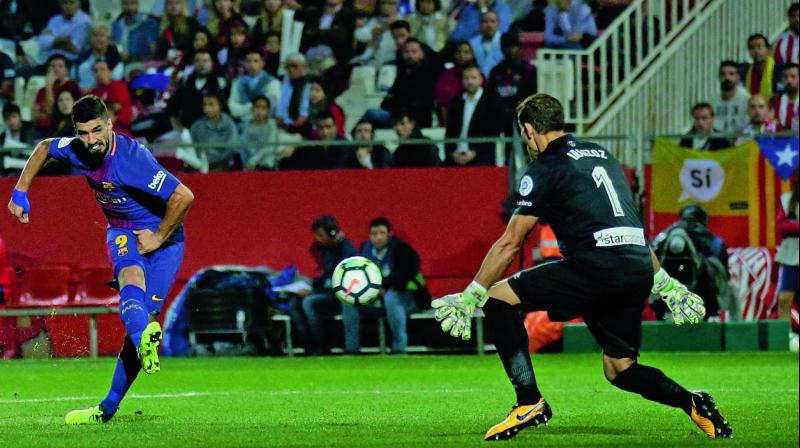 Madrid: Barcelona maintained their perfect start to La Liga with a sixth straight win as Luis Suarez and two own goals secured a 3-0 win at Girona in a match laced with political tension.

Real Madrid remain seven points behind Barca thanks to Dani Ceballos’s double on his full debut to bounce back from a shock midweek defeat by Real Betis, with a 2-1 win at Alaves on Saturday to move up to fourth. Girona were hosting Barca in a Catalan derby for the first time in the top flight, but a one-sided game on the field was marked by persistent chants in favour of independence for Catalonia.

Catalonia’s pro-separatist president Carles Puigdemont was in attendance, whilst the pro-independence Estelada flag was waved by sections of both supports. “The game had its difficulties,” said Barca boss Ernesto Valverde. “It’s a derby, there was a great atmosphere, tension. It is normal, but we played well.”

On the field there was much less controversy as Barca were rarely troubled after Aday Benitez turned Jordi Alba’s wayward shot into his own net after just 17 minutes. Another own goal extended their advantage three minutes after half-time when goalkeeper Gorka Iraizoz was fooled by Suarez’s dummy from Aleix Vidal’s cross.

And Suarez rounded off the scoring himself with just his second goal of the season by whipping the ball into Iraizoz’s near post from Sergi Roberto’s pass over the top. At Mendizorroza, Madrid were once again wasteful in front of goal, but still sneaked by an Alaves side that remain without a point after six games.

“Today we needed the three points. We are not in brilliant form, but for sure we will play better on other days,” said Real boss Zinedine Zidane. Ceballos was one of three changes made to the side that lost to Betis by Zidane as Luka Modric and Gareth Bale were left on the bench ahead of Tuesday’s Champions League trip to Borussia Dortmund.

And the Spanish under-21 international settled Madrid’s nerves after just 10 minutes as he caught Fernando Pacheco flat-footed. Alaves did register their first goal of the season five minutes before half-time when Manu Garcia met Munir El Haddadi’s cross flush to power a header into the top corner.

Madrid retook the lead just three minutes later, though, as Ceballos pounced on a poor punch from Pacheco to fire into the bottom corner.

Real should have ensured a far more comfortable afternoon after the break as Pacheco made a great save to deny Isco, Cristiano Ronaldo struck the woodwork twice and Sergio Ramos blazed over with the goal at his mercy. Yet, Alaves could also have snatched a first point of the season as Alfonso Pedraza’s deflected effort hit the bar before Pedraza struck the post when clean through on goal.