Lionel Messi's Barcelona will head into 2020 with a two-point advantage over second-place Madrid after completing 18 of 38 rounds. 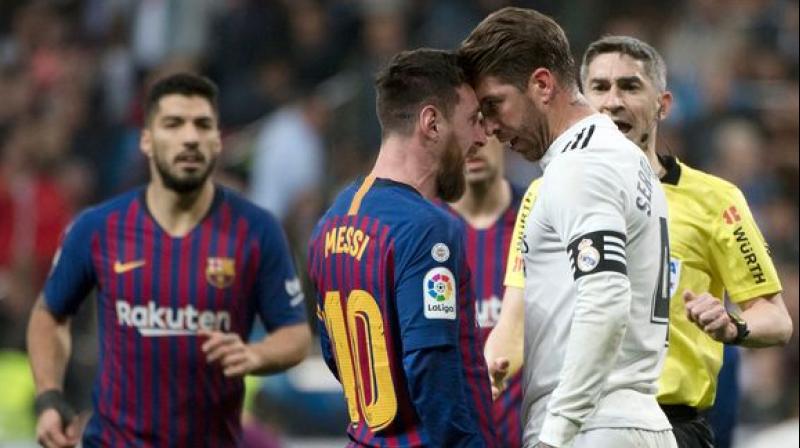 Even though Barcelona and Real Madrid have yet to dominate like in past seasons, the two heavyweights are at the top of the Spanish league for the winter break. (Photo: AFP)

Barcelona: Even though Barcelona and Real Madrid have yet to dominate like in past seasons, the two heavyweights are at the top of the Spanish league for the winter break.

Lionel Messi's Barcelona will head into 2020 with a two-point advantage over second-place Madrid after completing 18 of 38 rounds.

Barcelona got off to a slow start with only two wins in the first five rounds before newcomer Antoine Griezmann started to click with Messi and Luis Suárez, and the Catalan club ended the year without a loss in seven rounds.

There are times when you win the league by a wide margin and when everyone expects you to wrap it up months in advance that it loses excitement, Barcelona coach Ernesto Valverde, who is seeking a third consecutive league crown with the team, said Tuesday.

It is better when you win the league on the last round and by one point.

Madrid has only one loss - a 1-0 defeat at Mallorca in October - but it has drawn seven games, including its last three. Its continued scoring problems since Cristiano Ronaldo left two summers ago have left it without a goal in five encounters.

"We had difficulties at the beginning of the season, but now we are much better and strong defensively, improving every day, Madrid coach Zinedine Zidane said after Sunday's 0-0 home draw with Athletic Bilbao.

Today we couldn't score, but the important thing is to create the chances and we're going to turn this around in 2020 for sure.

A Sevilla side that has been revitalized by former Madrid and Spain manager Julen Lopetegui, and by the new players brought in by sporting director Ramón Monchi Rodríguez, is in third place at five points back.

Diego Simeone's Atlético Madrid has experienced trouble up front after losing Griezmann in the summer, but its revamped defense has kept it in fourth place, seven points behind Barcelona.

PLAYER OF THE SEASON SO FAR

Messi leads the league with 13 goals in just 13 appearances due to an injury that kept him out of the opening games. He is also credited with six assists by the league as he continues at age 32 to be the team's best scorer and playmaker.

An honorable mention goes to Karim Benzema for stepping up his play after the injury-hit Eden Hazard failed to make an impact since joining Madrid on a club-record transfer from Chelsea.

Benzema is second in the league with 12 goals in 17 matches.

SURPRISE OF THE SEASON

The breakout player is Real Sociedad midfielder Martin Odegaard, who is playing at the Basque club on loan from Madrid.

Odegaard has excelled as a precise passer and is leading one of the most attractive attacks in the league. Sociedad is in fifth place, just one point behind Atlético.

Sevilla continues to introduce talented newcomers in powerful defender Diego Carlos and physical forward Lucas Ocampos, both of whom have stood out and are likely on the radar of bigger clubs.

GOAL OF THE SEASON

Suárez scored not only the best goal so far this season in Barcelona's 5-2 rout of Mallorca on Dec. 7 but one of the best in his goal-studded career.

The Uruguay striker wowed Camp Nou when he used an audacious strike with the back of his right heel to scoop the ball around the diving goalkeeper and just inside the far post from a tight angle.

The goal put the perfect finish to a flowing passing combination between Frenkie de Jong and Sergi Roberto to break down Mallorca's tightly packed defense. It unquestionably goes into the annals of Barcelona's most beautiful goals.

With Messi, defending champion Barcelona is favored to edge a Madrid team that has yet to replace Ronaldo's missing firepower. Messi has led Barcelona to 10 league titles in 15 seasons.

We haven't reached our ceiling, Griezmann said after scoring the opening goal in Saturday's 4-1 win over Alavés.

I am feeling good before the holidays. Messi is the best in the world. We have a great squad, and when we need a push, Messi provides it.

While Barcelona and Madrid will surely get Champions League spots, Sociedad and a Valencia side that is coming on strong after a tumultuous coaching change could threaten Sevilla and Atlético for the other two berths.

Getafe, which was in the running for a top-four finish last season until faltering late, cannot be ruled out despite its modest profile.

Espanyol earned Europa League qualification last campaign, but it has been in a mess since both top scorer Borja Iglesias and ex-coach Francesc Rubi Ferrer left for Real Betis in the summer.

The Barcelona-based club is in last place after winning just two of 18 matches and it fired Pablo Machín, its second coach of the season, on Monday.

Espanyol has yet to win at home in the league this season and its fans are asking for a goal-scorer - in addition to yet another coach - in the January transfer market.

Leganés and Mallorca are likely to also feature in the relegation fight.

Celta Vigo has been the biggest disappointment of the season so far and is also near the bottom. But with Spain striker Iago Aspas and former Barcelona midfielders Rafinha and Denis Suárez it has the talent to rebound if it shores up its defense.