The Bollywood star was unveiled as the new co-owner of ISL franchise FC Pune City on Thursday. 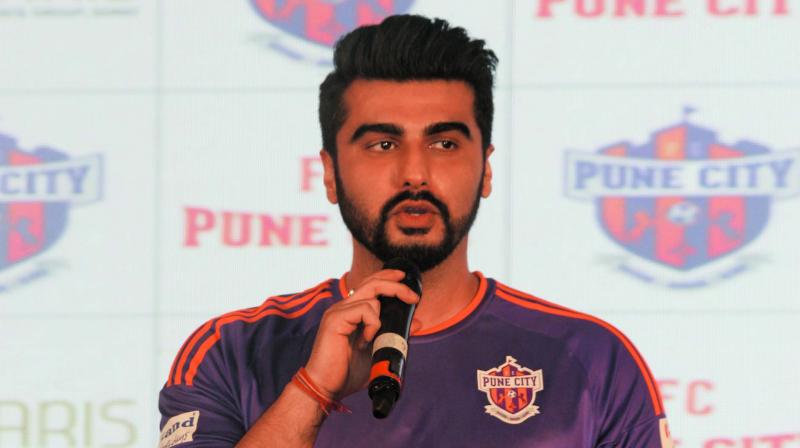 Bollywood actor Arjun Kapoor wants to play more pro-active role as co-owner of the the Rajesh Wadhawan-owned Indian Super League (ISL) franchise FC Pune City from next season. Arjun has been associated with Pune City from two weeks and was officially unveiled as the new co-owner by FC Pune City CEO Gaurav Modwel here on Thursday.

Another Bollywood star, Hrithik Roshan, was the face of the club for the last two seasons and Modwel informed, “Hrithik still holds a share in the club.” Arjun has been a brand ambassador before but being the co-owner is something he wanted to be for a long time. He now joins the likes of Ranbir Kapoor, Abhishek Bachchan and John Abraham, who co-own ISL clubs from the first season itself. Shah Rukh Khan had started the trend of Bollywood actors investing in sports by grabbing Indian Premier League franchise Kolkata Knight Riders in its first season (2008). “It is not about trend or idea, sports is evolving in India. IPL is from footballing format Premier League and La Liga and others. IPL came and it taught sports can entertain and it allowed other sports also to do the same in India. It has the face value to entetain 360 degrees,” Arjun says.

"I am a big fan of football. I was the brand ambassador of FC Pune City in the first season. When this opportunity came I thought it fits what I want with the right people. It happened organically, nothing was planned. India is going through a melting pot to give sports a chance,” the actor said.

Arjun informed that this season, which starts from November 17, he will observe things and get more involved from next season. “This season is embedded, it is embracing things and observing it. I will start getting involved more next season. It will be more about how to develop more infrastructure, create fans-connect and an own identity for the club. I would like to monitor youth players, academies, etc. I am kind of nervous also as I don’t want to be all talk, I want to do something. It is a five-year, 10-year agenda. We want to produce world-class players from the club,” he added. FC Pune City have struggled after good starts and have failed to qualify for the last four in the previous three seasons. Their performances have been one of the reasons that fans haven’t filled the 9,000 capacity stadium in Balewadi Sports Complex.

With a longer season, a new co-owner, new Serbian coach Ranko Popovic and young Indian players complimented by the experience of foreigners like Brazilian Marcelo Leite Pereira and Uruguyan Emiliano Alfaro, they will want a change of fortunes. Both Marcelo and Alfaro have experience of playingin in the ISL. Marcelo won the Golden Boot award last year. The team is currently undergoing pre-season training in Pune since September. Foreign players joined training from October 1.

The Chelsea fan revealed he would love to bring Blues legends Frank Lampard and John Terry to Pune City, whom he met recently at Stanford Bridge. “I would love to get Frank Lampard and John Terry here. They are two amazing superstars. Terry is lion-hearted. But I wish we will have some Indian players also look up to in future. That is my goal and I want to do it,” he said.

Arjun also said that as a  kid he didn’t play sport and by the time he wanted to, he was already fat and when he became fit again his age wasn’t on his side. “As a kid I didn’t end up playing sports, which is the biggest regret of my life, I will ensure my kids play,” he said.

“FC Pune City is the only club in the league to have a full-fledged residential academy set up and has three junior teams (U-18; U-16; U-14) and a Women’s team,” Modwel informed.