He achieved the feat during Bayern's match against Union Berlin here at the Allianz Arena in Munich. 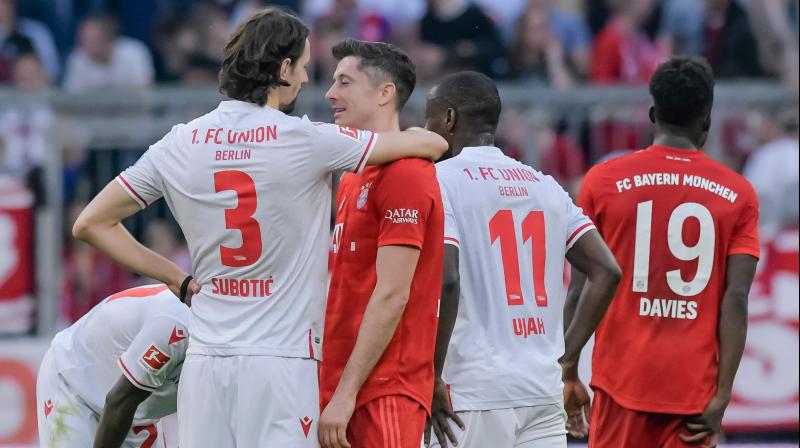 Bayern Munich's Robert Lewandowski on Saturday became the first player in the history of Bundesliga to score in the first nine games of a season. (Photo:AFP)

Munich: Bayern Munich's Robert Lewandowski on Saturday became the first player in the history of Bundesliga to score in the first nine games of a season.

He achieved the feat during Bayern's match against Union Berlin here at the Allianz Arena in Munich.

With this goal, he has taken his tally to 13 goals in the current Bundesliga season.

Before Lewandowski, Pierre-Emerick Aubameyang held the record as he scored in eight successive games for Borussia Dortmund during the 2015-16 season.

In the match between Bayern and Union Berlin, the former was seen in impressive form and they did not allow their opponent to create any sort of momentum in the match.

Munich enjoyed the bulk of ball possession and this finally paid dividend for them as they scored the opening goal of the match in the 13th minute.

Benjamin Pavard scored the goal for Munich, giving them a 1-0 lead. No more goals were registered in the first half, and as a result, the side went into half time with a 1-0 lead.

In the second half, Lewandowski got among the action and he netted the ball into the goalpost in the 53rd minute, giving Bayern a 2-0 lead.

Union Berlin tried their best to register a goal, but Bayern's defence was able to hold them off for the majority of the half. however, Berlin finally broke the deadlock in the 86th minute as Sebastian Polter scored after the team was handed a penalty.

However, Union Berlin was not able to score their second goal and in the end, Bayern picked up a 2-1 win in the end.

Bayern is at the top spot of the Bundesliga while Union Berlin is placed at the 15th place.