The record-breaking Argentinian is likely to be on the bench as he continues his recovery from a thigh problem. 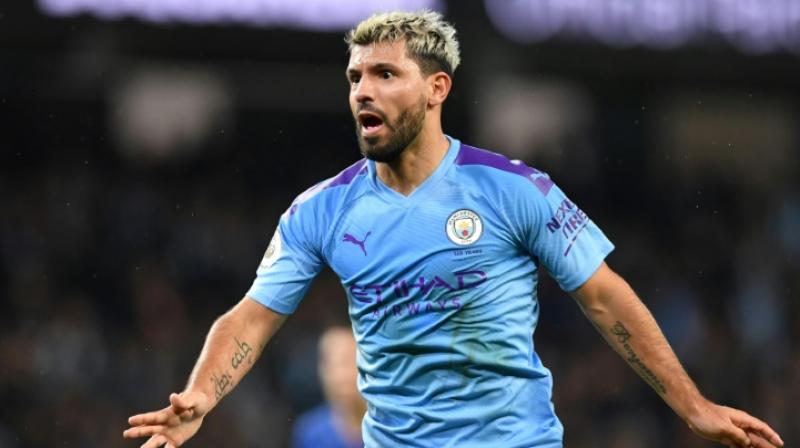 The record-breaking Argentinian is likely to be on the bench for the reigning Premier League champions visit to Wolves on Friday as he continues his recovery from a thigh problem.

That injury has sidelined the 31-year-old since the end of November and given Guardiola a taste of what life will be like when Aguero's contract ends next year.

The City manager does not expect to be able to talk Aguero into changing his plans to end his career in his homeland and that will leave Guardiola with the thankless task of replacing a man who has, to date, scored 244 times for his club.

"I'd say it will be one of the toughest (tasks). Sergio is irreplaceable," said Guardiola.

"We have an incredible other striker in Gabriel Jesus and maybe another one will come when Sergio leaves. But he is irreplaceable."

Aguero played a pivotal role when City were crowned champions of England for the first time in 44 years when his last-gasp winner against QPR took them to the 2011/12 Premier League title.

"The most important moment of this club, more important than if one day this club wins the Champions League, is the moment when Sergio scored that goal, against QPR to win the first Premier League (2012) after I don't know how many years," said Guardiola.

"That moment is much better than four titles in one season or whatever. And he was THE guy. More than anything, more than the goals he has done at this club.

"But sooner or later it is going to happen (Aguero's departure), he'll decide when."

Aguero's efforts in the three-and-a-half seasons that Guardiola has been in charge at the Etihad have been all the more impressive given many thought the Argentina international would not fit into the Catalan manager's demanding style of play.

Jesus was seen as an immediate successor to Aguero but the veteran had other ideas and, after leading City to that memorable maiden Premier League title in 2012, has been a central figure during the most successful years in the club's history.

"I've never seen as big a star as him be so humble, such a funny guy, and it is a joy to work with him and how he accepts sometimes my decisions even when it has not worked for him.

"As big a star as him don't (usually) accept that. I've worked with other stars -- who believe they're bigger stars than Sergio and they were not -- and it was more difficult to handle them or be with them."

Aguero remains such a crucial figure in City's modern history, especially since the pre-season departure of former captain Vincent Kompany, and while Guardiola would be open to the possibility of Aguero remaining beyond 2021, he does not feel it likely.

"I don't know. He can stay but it depends on his physical condition and desire," he said.

"But I didn't speak with him and I don't know his intentions."

David Silva is also due to leave City after the end of the season, with Guardiola openly conceding he has no hope of talking the Spain international into staying at the Etihad.

But, unlike Aguero, Guardiola does not expect to sign a replacement for Silva, a player many believe to be the best foreign import in Premier League history.

"In this position, we're not going to do anything," he said. "Maybe I'll change my mind but we have other priorities. I have enough there.

"Bernardo can play there, Phil (Foden) is there, we have (Ilkay) Gundogan and Kevin (De Bruyne)."