Captain Kane followed up his own shot to equalise in the 53rd minute and cancel out Adam Webster’s first-half header. 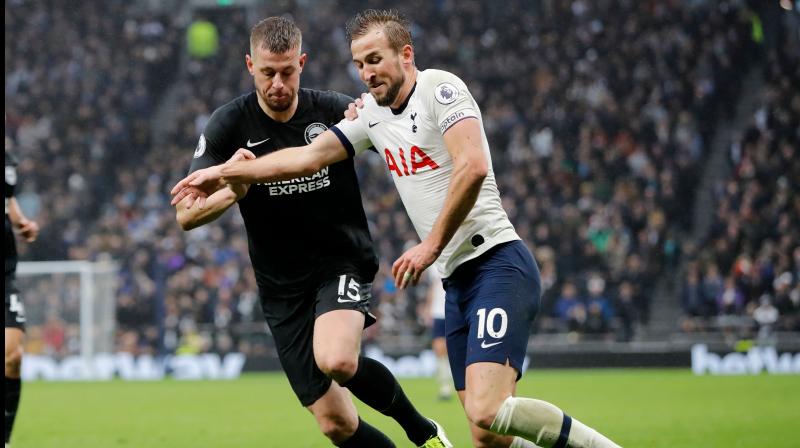 Harry Kane and Dele Alli led a second-half fightback as Tottenham Hotspur finally came to life to claim a 2-1 home victory over Brighton & Hove Albion in the Premier League on Thursday. (Photo:AFP)

LONDON: Harry Kane and Dele Alli led a second-half fightback as Tottenham Hotspur finally came to life to claim a 2-1 home victory over Brighton & Hove Albion in the Premier League on Thursday.

Captain Kane followed up his own shot to equalise in the 53rd minute and cancel out Adam Webster’s first-half header and Alli put Spurs ahead in the 72nd, knocking in a pass from Serge Aurier to complete a move inspired by Christian Eriksen.

Spurs were reeling from a disheartening home loss to Chelsea and were missing key forward Son Heung-min due to suspension after the South Korean was sent off in the 2-0 defeat.

“The first half performance was bad and related to the previous result and defeat. You need to start well to get back some good feelings and we didn’t start well,” Mourinho told a news conference.

“The second half was different we brought everything we had to bring, we got back to taking risks and defending in a less safe way.”

The victory took Tottenham up to fifth in the standings on 29 points after 19 games and left Brighton in 13th on 20.

A sleepy atmosphere gripped their stadium in the early kick-off the day after Christmas, although the mood was briefly lifted when Kane put the ball in the net before a VAR review ruled the effort fractionally offside.

Brighton, who had thrashed Spurs 3-0 in October in one of the final games under Mourinho’s predecessor Mauricio Pochettino, went ahead when defender Webster appeared unmarked to head in a Pascal Gross free kick in the 37th minute.

Mourinho left club record signing Tanguy Ndombele out of the squad, later explaining that the French midfielder had told him he was not ready to play because he was worried he could suffer a relapse of the injuries which hampered his start at the club.

The coach brought on Giovani Lo Celso and Eriksen after Kane’s leveller and the move paid off as Eriksen outfoxed Brighton’s defence with a cross-field pass which Aurier flicked to Alli.

“The spirit in the second half was so important. We did not start very well, we scored a beautiful goal which was offside and then they went on and scored. Brighton were very difficult to control but our spirit was fantastic,” added Mourinho.

“We cannot lose two in a row, the work rate was really brave. I told the boys to focus on this game and to give every last piece of energy we have. I think when you lost a game it hurts.”