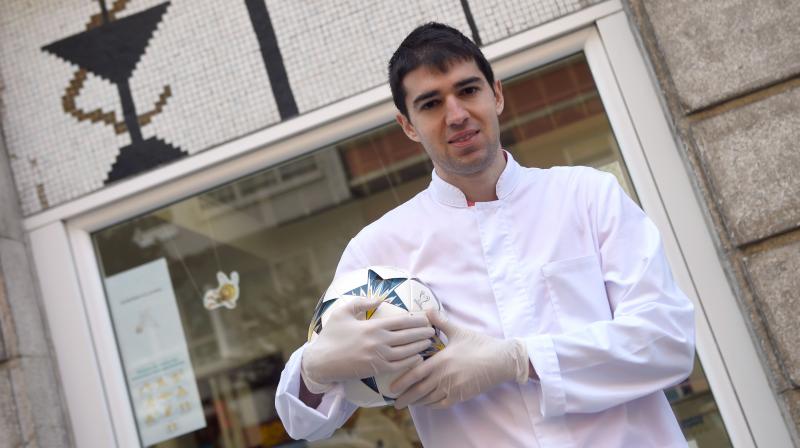 Corunna: Journeyman footballer Toni Dovale put his football boots to one side and slipped into a pharmacist's white coat in the front line struggle against coronavirus in Spain.

The 29-year-old pharmacy graduate and former top-level sportsman had been playing football for a Thai club, but was visiting his family in Spain when the Covid19 pandemic took hold.

Dovale has played football for Spanish top flight clubs Leganes and Rayo Vallecano, Sporting Kansas City in the United States and also Bengaluru in the Indian Super League before moving to Thailand.

Dovale played for Albert Roca-coached and Sunil-Chhetri-led Bengaluru FC and played a part in setting up his skipper's goal in a crucial game against NEROCA FC.

So he decided to pitch in his 'grain of sand' against the virus using the studies which he had yet to put into practice due to his passion for football.

"I really was packing my bags to go back when things got complicated," Dovale told AFP.

Travel restrictions trapped Dovale in his native La Coruna in the Atlantic coast region of Galicia, where he started his football career with nearby Celta Vigo.

Although Dovale also completed his university studies in pharmacy four years ago, he had never actually worked in the field.

Now with the world of sport in limbo the footballer realised the time was ripe to use his studies to help his homeland.

"I was playing in Asia then; pharmacy is different there and I was never in Spain long enough to work," he says, "With football stopped and travel banned I said to myself 'get some practical experience and do your bit'."

"Right now I'm the same as everyone else in that I train at home jumping over the furniture," he jokes.

"I start at 7am and I use whatever I can including bottles of water and stuff like that. Then I go downstairs to the pharmacy.

"I hope this is over as soon as possible and that I can go back to playing football again.