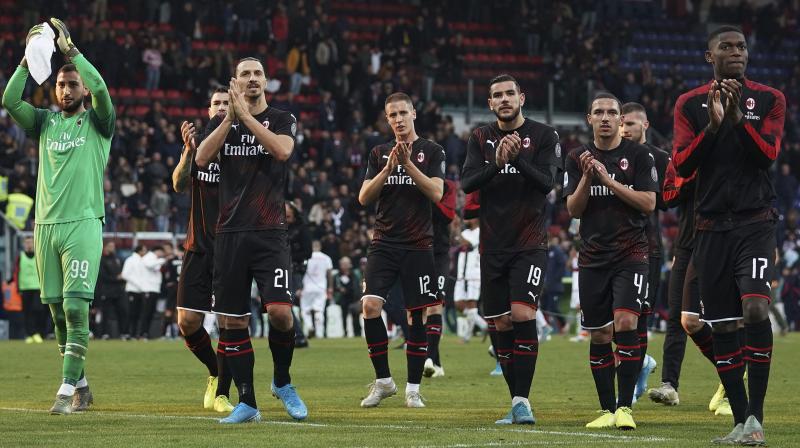 Milan: The Italian government has ruled out team training before May 18, leaving Serie A chiefs with their backs against the wall if they are to finish a season interrupted by the coronavirus crisis.

Prime Minister Giuseppe Conte on Sunday delayed a decision on restarting football despite allowing top athletes to resume training in a week's time.

From next Monday, individual athletes will be able to resume training. But for team sports, in particular football, it remains a waiting game, in a championship suspended since March 9.

So, while cyclist Vincenzo Nibali will be able to resume his usual training, Cristiano Ronaldo of Juventus will not.

Sports Minister Vincenzo Spadafora was cautious, warning: "It's not a given that football will resume."

"On May 18? We will see, for team sports, such as football, rigid safety protocols are needed," Spadafora told Italian television.

FIGC president Gabriele Gravina insisted Monday they were "working to restart football safely", warning of the damage not finishing the season would entail.

"We're working tirelessly to define the best conditions for the completion of the suspended championships, responsibly planning all the steps to be taken, but also to define the various scenarios," said Gravina.

For the Italian sports press the government's announcement was "a cold shower" in the words of Turin-based Tuttosport.

"Two-speed recovery," wrote Gazzetta dello Sport of pushing a decision on team sports back, while Corriere dello Sport branded it "a joke".

Lazio sports director Igli Tare said football clubs felt like they were being "discriminated" against.

The Roman club is second in Serie A just one point behind leaders Juventus and within sight of a first league title since 2000.

"It is news that I did not expect," said Lazio midfielder Marco Parolo. "I don't understand why we footballers with a suitable sports centre can't resume our sessions normally.

"You can go running in the parks, but it doesn't make sense if I have a suitable sports centre to do it.

"Formello (Lazio's training centre) is equipped with five pitches. By splitting up, we can avoid contact and we can vary the schedules of individual sessions," he said.

"We respect the indications of the government but all the conditions are there to be able to resume training safely." Italian football chiefs had already pushed back the end of the Serie A season from June 30 to August 2.

The FIGC's objective of a return to competition in early June has become impracticable, shifting the date towards June 10-14.

With at least three weeks of preparation needed, and, in some cases, 13 rounds to be played, beyond mid-June it would be impossible to play all the remaining matches.

Another solution being touted would be a play-off to allocate the Scudetto and qualifying places for European competition and relegation places.

"This yes, I would accept it," Lazio president Claudio Lotito told La Repubblica.

Any change of format would have to be communicated to European football governing body UEFA by May 25 at the latest.

Serie A's 20 clubs have voted unanimously to complete the league season, but the final decision will be down to the government.

But in a football-mad country clubs may not be able to count on the support of a public grieving over 27,000 dead.

Recent polls have suggested that two-thirds of Italians are opposed to a return to the pitch.