Klopp has not won any silverware since arriving at Anfield in 2015, while Pochettino is yet to claim any trophy in his coaching career. 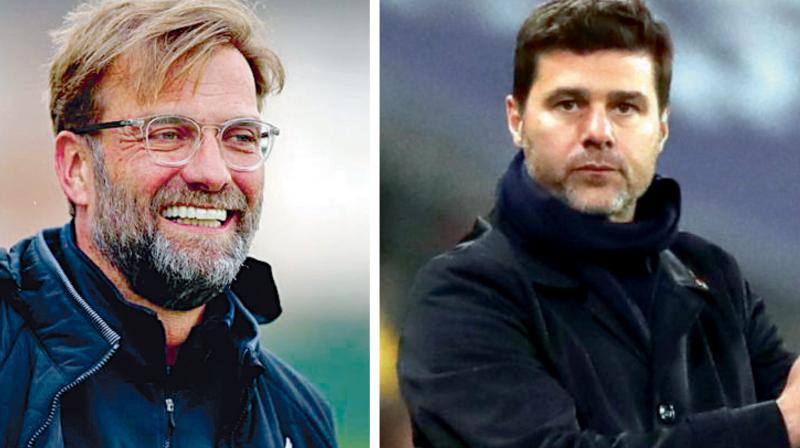 Klopp's impression was that if he had not delivered silverware in that time then he would not last more than four years in the job.

London: The transformation of Liverpool and Tottenham's fortunes under Jurgen Klopp and Mauricio Pochettino has so far been measured in progress rather than trophies.

That will all change for the winner of Saturday's Champions League final with one of the two claiming the biggest prize in Europe. Klopp has not won any silverware since arriving at Anfield in October 2015, while Pochettino is yet to claim any trophy in his coaching career.

However, the fact that Klopp and Pochettino are two of the highest rated coaches in world football is evidence if any was needed that there is more to good management than lifting trophies.

Klopp has come close on several occasions. The German has lost three finals as Liverpool boss, on penalties to Manchester City in the League Cup and Sevilla in the Europa League during his first season in 2015/16 before fortune favoured Real Madrid in last season's Champions League final.

Falling at the final hurdle once more would be even more heartbreaking for the Reds after missing out on the Premier League title by the finest of margins to City despite posting a club record 97 points.

"If I sit here in four years, I am pretty confident we will have one title," said Klopp on his first day at Anfield.

Klopp's impression was that if he had not delivered silverware in that time then he would not last more than four years in the job. Saturday's meeting in Madrid is his last chance to deliver on that confidence. But even if he loses, Klopp will still be revered rather than relieved of his duties for putting Liverpool back among the European elite.

The five-time European champions have by definition had many great nights in continental competition. But beating Barcelona 4-0 in their Champions League semi-final, the second leg to overturn a 3-0 first leg deficit may be the best of all.

"A moment like Barcelona is worth more than silverware. Wow! That's exactly the picture we want to draw for the outside world, this is Liverpool," said Klopp.

If Klopp has put Liverpool back on their perch, Pochettino has lifted Tottenham to heights they have never seen before. Spurs had only played in the European Cup twice in their history prior to the Argentine's arrival in 2014.

Now they are in their first ever Champions League final and next season will be their fourth consecutive year in the competition. Pochettino has attracted criticism for playing down the importance of domestic cup competitions. But his vision for Tottenham has been bigger, to change in his words "the dimension" of the club.

This season will always be remembered as the one Tottenham made the Champions League final and opened a brilliant new 62,000-capacity stadium. However, to deliver the latter at a cost of over 1 billion pounds (1.27 billion dollars), Pochettino has had to work under restrictions that make his achievements all the more extraordinary.

While Manchester City, Paris Saint-Germain, Barcelona, Juventus and many others poured hundreds of millions into funding a Champions League dream, Spurs have not signed a single player since January 2018.

That stretched squad was also fatigued by mass participation in the latter stages of last summer's World Cup, while injury robbed them of Harry Kane for the quarter and semi-finals. And yet Spurs have consistently beaten the odds, none more so than recovering from 3-0 down on aggregate against Ajax in the semi-final thanks to Lucas Moura's second-half hat-trick in Amsterdam.

"No one expected Tottenham to be able to get to a final, but we're here on our own merit," said Pochettino.

"This makes it more amazing and you enjoy it in a different way."

Pochettino has even hinted he could walk away if victorious in the Spanish capital, his work done after taking Tottenham to where no-one truly believed he could. No matter which manager finally lifts the famous trophy. It will have been well earned.