Serbians wear nationalism on their sleeve

According to him, Serbia is an easy target for the international community. 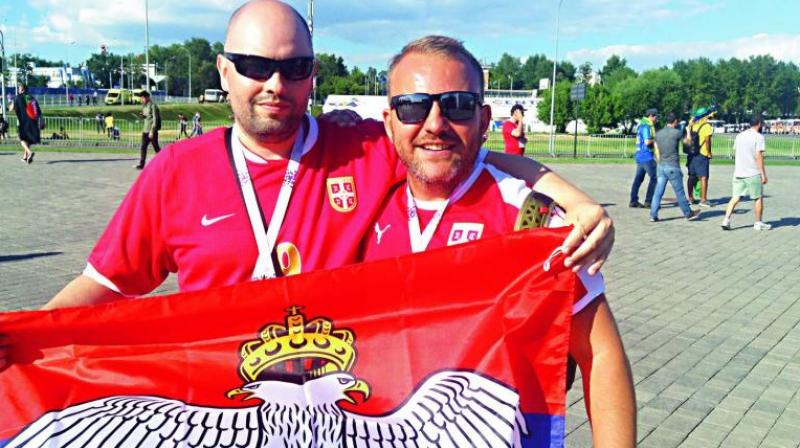 Serbian fan Goran Pentalic (left) with a compatriot ahead of the Brazil-Serbia match.

Moscow: Spotting Serbian fans around the Spartak Stadium ahead of the Group E match between Brazil and Serbia here on Wednesday was easy, as most of them were either carrying the country’s flag or wearing the football team’s jersey. Nationalism always runs high for the Balkan countries that had been part of the erstwhile Yugoslavia.

Serbia’s second round match in the pool against Switzerland degenerated into a political battle after the Swiss goal-scorers, Granit Xhaka and Xherdan Shaqiri, alluded to a symbol on the Albanian flag during celebrations. Both Xhaka and Shaqiri are ethnic Albanians. Serbia has a frosty relationship with neighbouring Albania. Shaqiri traces his roots to Kosovo, where Albanians are the dominant ethnic group. Serbia hasn’t yet recognised Kosovo, which had broken away from it.

A Serbian football federation official had called for stringent action against Xhaka and Shaqiri but Fifa let the duo off with a fine. Serbian coach Mladen Krstajic also stirred a political controversy by asking for a trial in The Hague for the German referee who had failed to give a penalty to his team in the Switzerland match. Quite a few prominent Serbian leaders have been punished at the International Court of Justice in the Dutch city and Krstajic’s reference to it wasn’t subtle.

Goran Pentalic, a Serbian fan, said there was a “conspiracy” against his country in the World Cup. “How else would you explain the non-use of Video Assistant Referee for decisions concerning our team?” he asked. Pentalic was far from diplomatic about Xhaka and Shaqiri. “We hate Albanians,” he added.

Another Serbian fan who wasn’t willing to give his name spoke at length about the Albanian issue. “Xhaka and Shaqiri represent Switzerland, so they should be loyal to the country. If their heart is with Albania, they should have opted to play for it,” he said.

After learning that the reporter he was speaking to was from India, the fan asked how Indians would feel if a Sikh player openly advocated the formation of Khalistan. “Serbia is not the only country in the world where nationalistic sentiments run high. Did India not face any problem during Partition? Xhaka and Shaqiri were wrong to bring politics into a sporting event. We are here to enjoy football. I hope the actions of the Swiss players inspire us against Brazil,” he added.

According to him, Serbia is an easy target for the international community. “We are a small country, so it is easy to point a finger at us. Our coach Krstajic wasn’t wrong. What punishment did George Bush get for ruining Iraq without any reason? How did he get away after not finding any weapon of mass destruction there?” he asked.

A woman on a stilt wearing a T-shirt emblazoned with the flags of many countries was the star attraction during the build-up to the Brazil-Serbia match. After taking a selfie with her, a Serbian fan found something amiss. “Where is the Serbian flag on your T-shirt?” he asked.