The teen-aged players’ ability to rise to the magnitude of the occasion in front of a raucous Kolkata crowd might also play a part. 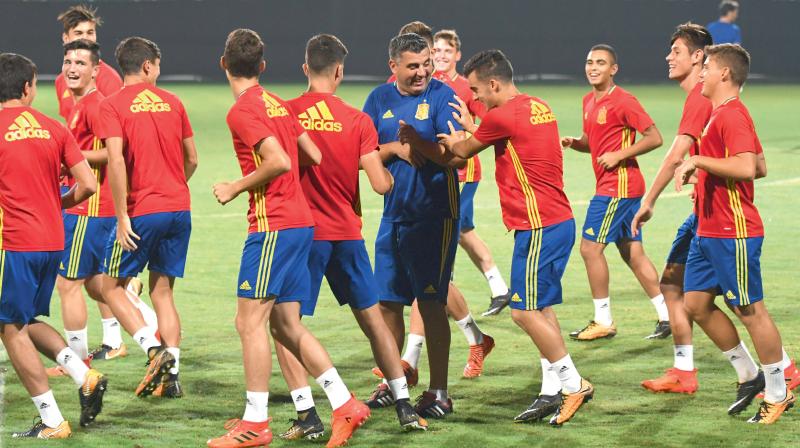 Members of the Spanish team share a light moment at a practice session in Kolkata on Friday, the eve of their U-17 World Cup final against England. (Photo: Pritam Bandyopadhyay)

Kolkata: Few would have fancied a European re-run as the Under-17 World Cup’s climax, but who will argue against England and Spain’s credentials considering their recent pre-eminence in youth football.

England’s commanding 3-1 semi-final victory over mighty Brazil confirmed their fourth final appearance in age-specific tournaments in the calendar year. Spain’s pedigree spans a greater period, with seven European U-19 Championship trophies and three U-17 Euro titles (the most) since the turn of the century.

Just as England can flaunt their Fifa U-20 World Cup and Uefa European U-19 Champio-nship crowns won this year, Spain will remind the Young Lions of their U-17 Euro triumph on penalties against them in May.

But for all their silverware Spain are yet to lay hands on the 4.6 kg U-17 trophy and regardless of who emerges stronger on Saturday, the world will get a new junior world champion team.

Considering England’s recent rich form, their previous best at the tournament were quarter-final finishes in 2007 and 2011.

The present bunch of players, however will seek psychological stimulus from their 4-1 shoot-out win over England in Varazdin, Croatia, where majority of the current squad were in action.

Chief among them was England’s Rhian Brewster, who missed a penalty in the shootout in Croatia, and Spain captain Abel Ruiz, who converted his spot kick.

Both have gone from strength to strength since the U-17 Euro final in May. Their battle for the Golden Boot is a juicy sub-plot in Sunday’s overall context.

The slippery Brewster has been England’s double hat-trick hero, brewing up a storm on the pitch.

With seven goals, the Liverpool product sits in pole position for the Golden Boot, muting voices that had raised questions over England’s finishing after the departure of club-tied Jadon Sancho before the second round.

Playmaker Phil Foden and Callum Hudson-Odoi’s unstinting and under-rated support from behind has helped Brewster lurk in the opposition area, capitalising on his ‘fox in the box’ instincts to finish off chances when they arrive.

If Brewster sparkles for England with his dynamism, agility and pace, Spain have the able feet of Ruiz.

The Spanish no. 9 may be one behind Brewster in the top scorers’ chart but has been equally efficient.

Using his formidable frame to shield the ball and create space, the Barcelona undergraduate is more of a traditional big, strong centre forward rather than ‘false no. 9s’ prevalent in Spanish football.

Ruiz’s good understanding with creative players Cesar Gelabert and Julio Gomez was on prominent display in their 3-1 semi-final triumph over Mali.

England lead the overall scoring charts with 18 goals, Spain are joint third on 15. The offence-oriented teams’ mobility, interchanging of positions, link-up play and accurate passing ability have been soothing to the eyes of the spectators.

Goals have flowed in the tournament with an average of 3.5 per match and the two coaches’ approach will be keenly observed, in view of their relative defensive infirmities.

The teen-aged players’ ability to rise to the magnitude of the occasion in front of a raucous Kolkata crowd might also play a part.

England, though, might be better equipped to tackle crowd pressure after playing five of their six matches at the imposing Yuba Bharati Krirangan.