The 38-year-old Swedish striker signed a six-month contract with the struggling Italian giants on Friday vowing to help rescue their season. 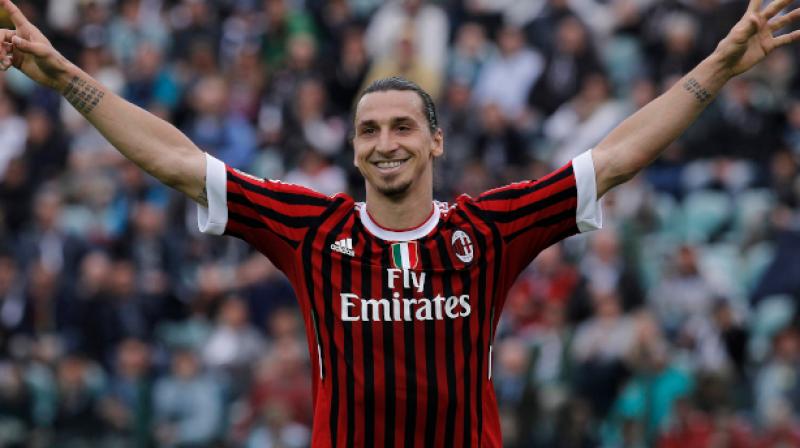 Same look, same impressive build and same oversized ego: Zlatan Ibrahimovic returns to AC Milan for a final challenge seeking to prove that he remains the superstar he claims to be. (Photo:AP)

Milan: Same look, same impressive build and same oversized ego: Zlatan Ibrahimovic returns to AC Milan for a final challenge seeking to prove that he remains the superstar he claims to be.

The 38-year-old Swedish striker signed a six-month contract with the struggling Italian giants on Friday vowing to help rescue their season.

"I'm coming back to a club I hugely respect and to the city of Milan I love," he said.

"I'll fight together with my teammates to change the course of this season. I will do everything to make it happen."

Ibrahimovic knows the game in Italy, having played for three different Italian clubs.

He first joined Juventus in 2004, moving on to Inter Milan after the match-fixing scandal in 2006, then arriving at AC Milan in 2010 on loan before making the move permanent.

One of the most successful clubs in the world, AC Milan are 11th in the league just seven points above relegation.

The club have come up short in their attacking options with just 16 goals in 17 games.

Ibrahimovic left Los Angeles Galaxy last month after a two-year stay and 52 goals in 56 games, leaving him free to sign with another club.

Milan must hope that showy Swede, never far from the headlines, will bring some punch and a winning mentality to the locker room.

The son of a Bosnian and a Croatian, Ibrahimovic grew up in Rosengard, a tough working class neighbourhood of Malmo, Sweden.

Among young people with immigrant backgrounds, Ibrahimovic has become even more of a symbol, as have his cocky attitude, individualism and zealous ambition. But he has fallen out of favour in his hometown where a bronze statue unveiled in his honour in Malmo in October has been vandalised by fans angry that he has bought shares in a club in Stockholm.

Ibrahimovic had turned out for many of Europe's top teams, such as Amsterdam's Ajax, AC Milan, Barcelona, Paris Saint-Germain and Manchester United, before he signed for US team LA Galaxy in 2018.

In his second autobiography entitled "Football is me," published in 2018 he claims to have changed the history of his sport.

"Now go back to baseball," he told his supporters at the Los Angeles Galaxy, where he was, between 2018 and 2019, the best player in the North American Championship.

"I came, I saw, I conquered. Thank you LA Galaxy for making me feel alive again."

During his time at PSG he promised to stay "if they replace the Eiffel Tower with (his) statue".

"I arrived like a king, I'm leaving like a legend," he said after he left the French club.

He proved in California that he still had legs after injuries precipitated his departure from Manchester United in 2017.

But Ibrahimovic's strength is that he has the talent to back up his verbal jibes.

He delighted fans with his "kung fu" goals, his outrageous overhead goal against England in 2012, or the slalom in 2004 with Ajax, dribbling past six players to beat the goalkeeper, which launched his career.

At PSG, he became the best scorer in the club's history, with 156 goals in 180 games, before being overtaken by Edinson Cavani.

He was twice top Serie A scorer, in 2009 with Inter and in 2012 with AC Milan, he also has the record for the Swedish national team with 62 goals.

His first year with Manchester United was a success, with 28 goals in 46 games, before he was sidelined with a his knee ligament tear before leaving Europe in March 2018.

But he remains and exemplary professional, as Italian coach Carlo Ancelotti found. In his book, "My Coaching Secrets", Ancelotti said he had been told the Swede was "a difficult player to manage".

But he discovered at PSG a player "very available and professional, always focused on his work."

"His fascinating character and extraordinary consistency in training have always been examples for his teammates," added the Italian.

At the age when most players are on the decline, the Swede is trying to stretch an already rich career.

France's Thierry Henry and England's David Beckham returned to Europe at the end of their careers, after an exile across the Atlantic, but without regaining their luster.

Succeeding where these stars have failed is a challenge the size of the Swede.