Sports   Football  29 Mar 2019  Serie A: Keane keen to prove himself at Juventus in absence of Ronaldo
Sports, Football

Serie A: Keane keen to prove himself at Juventus in absence of Ronaldo

Ronaldo looks set to miss the champions next three Serie A games, after picking up a right thigh injury playing for Portugal. 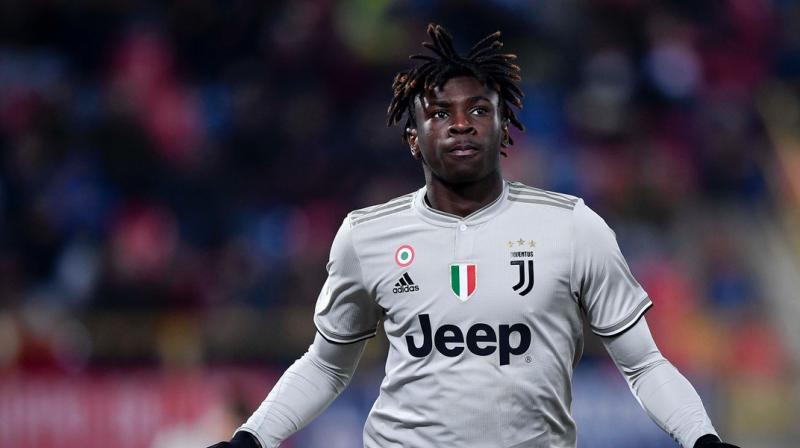 The 34-year-old was rested by Juventus in their last Serie A game, after his hat-trick against Atletico Madrid sealed a place in the Champions League quarter-finals against Ajax. (Photo: Juventus fc twitter)

Milan: Cristiano Ronaldo's absence through injury could give Moise Kean the chance to shine with Juventus after the teenager's stunning breakthrough with Italy during the international break.

Ronaldo looks set to miss the champions next three Serie A games, against Empoli on Saturday, Cagliari on April 2, and AC Milan four days later after picking up a right thigh injury playing for Portugal.

The 34-year-old was rested by Juventus in their last Serie A game, after his hat-trick against Atletico Madrid sealed a place in the Champions League quarter-finals against Ajax.

And without the Portuguese star Massimiliano Allegri's side suffered their first league defeat this season 2-0 against Genoa.

Juventus are still closing in on an eighth consecutive Scudetto with a 15-point gap on second-placed Napoli.

And Kean will be hoping to get a chance to showcase his talents for their first game at home against Empoli since their dramatic victory over Atletico in the Allianz Stadium.

The 19-year-old won his first cap for Italy in a friendly last November, but it was his second appearance for the former world champions that has brought him into the spotlight.

He became the youngest Italian to score in over 60 years in their 2-0 Euro 2020 qualifying win over Finland last Saturday.

He scored again in a 6-0 rout of Liechtenstein on Tuesday.

Being in a star-studded squad alongside five-time Ballon d'Or winner Ronaldo means that Kean's opportunities of regular action have been limited.

But ahead of Juventus' return leg against Atletico, Allegri handed Kean his first Serie A start of the season against Udinese and the forward seized his rare opportunity with a brace.

"I always try to be ready and train regularly so that I'm prepared when the time comes," Kean said.

"I learn from Cristiano Ronaldo, in training, I steal his secrets. I can only learn from him. It happens every day."

Juventus captain Giorgio Chiellini warned that his side have settled after the Champions League excitement.

"A couple of weeks have passed and I think we've fully realised what happened, so are now even more fired up for these final two months of the season," said the Italian defender, who has played over 500 games for Juventus.

"We have a good advantage at the top of the table, but want to get the Scudetto sorted as soon as possible."

Roma, in fifth, lost to struggling SPAL last time out and another upset would seriously compromise a Champions League place next season.

Napoli have won just two of their last six league games, but are still seven points ahead of third-place Inter Milan, who host Lazio after an action-packed 3-2 Milan derby win.

Argentina striker Mauro Icardi could make his return for Inter as he is back training having not played since February 9 amid a contract dispute.

But Dutch defender Stefan de Vrij will miss Sunday's game against his former club, along with Argentina striker Lautaro Martinez, after injuries picked up on international duty.

Lazio -- six points adrift of the Champions League places -- were deprived of elite European football this campaign by a defeat to Inter at the end of last season.

The Genoa side's attack is spearheaded by Serie A top scorer Fabio Quagliarella, who also made history by becoming the oldest player to score for Italy during the week.

Sampdoria are three points off the Europa Leauge berths and have won three of their last four games.