Already in the quarter-finals of Champions League, PSG are yet to know their opponents as the round of 16 ties were not completed 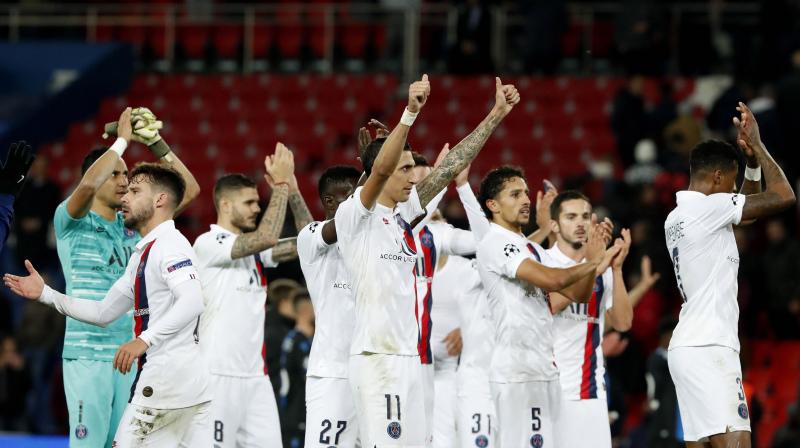 PSG players wave to their supporters after winning their Champions League Group A match against Brugge at the Parc des Princes stadium, in Paris. AP Photo

Paris: Paris Saint-Germain will complete their Champions League season abroad if France's new coronavirus regulations don't allow them to play matches in the country, the club's president has said.

Nasser Al-Khelaifi made the announcement after French Prime Minister Edouard Philippe said that professional football could not restart until September, putting the current Ligue 1 season in serious danger of being cancelled.

"We respect the French government decision. With agreement from UEFA, we plan on competing in the Champions League, wherever and whenever it is held," Al-Khelaifi said in a statement.

"If it is not possible to play in France we will play our matches abroad, ensuring the best medical safety conditions for our players and all of our staff."

Philippe's announcement to France's National Assembly on Tuesday appeared to spell the end to the current Ligue 1 and 2 campaigns.

However, France's sports ministry told AFP after the speech that sports fixtures could not take place even behind closed doors before the end of July, leaving open the possibility that some matches could still be played in August.

According to documents seen by AFP, European governing body UEFA is aiming to finish this season's Champions League by the end of August.

PSG are in the quarter-finals of this year's competition, but are yet to have an opponent as the round of 16 ties were not completed before the Covid-19 lockdown hit Europe.

According to the documents, the round of 16 will be finished on August 7-8, with the quarters played between August 11-15 and the final on August 29.