Milan confirmed in a statement that the 41-year-old had left with two years to run on his contract. 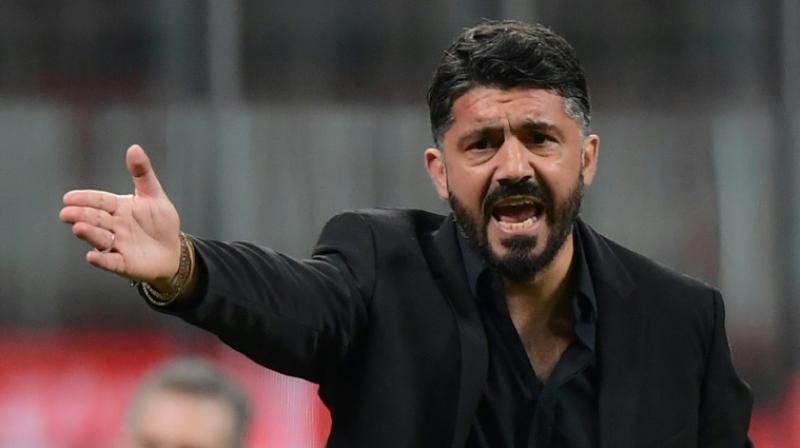 Gattuso took charge of Milan, his first job coaching a Serie A side, in November 2017. Since then, U.S. hedge fund Elliott Management has taken control of the indebted club from Chinese businessman Li Yonghong. (Photo:AFP)

Milan: AC Milan coach Gennaro Gattuso parted company with the club on Tuesday, two days after his team narrowly missed out on qualifying for next season’s Champions League to extend their absence from the competition to six seasons.

Milan confirmed in a statement that the 41-year-old, a combative former midfielder who spent 13 seasons of his playing career at the club, had left with two years to run on his contract.

“A true Rossoneri (red and black) legend, Gennaro stepped into the role during what was a difficult period for the club and has performed admirably, securing the club’s highest league points total since 2012/13.”

Gattuso took charge of Milan, his first job coaching a Serie A side, in November 2017. Since then, U.S. hedge fund Elliott Management has taken control of the indebted club from Chinese businessman Li Yonghong.

Failure to qualify for the Champions League is expected to cost the club at least 50 million euros (USD 55.85 million) next season in revenue they would have received for participation and television rights.

Milan won an appeal against the punishment at the Court of Arbitration for Sport and, in a new ruling in December, was given until 2021 by UEFA to comply with the rules or face a ban.

In April, UEFA opened a fresh case against Milan for again allegedly failing to comply with the rule in its most recent monitoring period.

Gattuso led Milan to sixth place in Serie A last season and the Coppa Italia final, where they lost 4-0 to Juventus. This season they were beaten by Lazio in the Coppa Italia semi-finals and were knocked out of the Europa League in the group stage.

They finished fifth in Serie A, one point and one place outside the top four who qualified for the Champions League.

Overall, he was in charge for 82 matches in all competitions with 40 wins, 22 draws and 20 defeats.

Observers felt that he did the best with an unbalanced squad which had been cobbled together and there was more to his team than merely the grit and determination he was associated with as a player.

After Sunday’s 3-2 win at SPAL turned out to be in vain, Gattuso said that coaching the team had taken its toll.

“During this time, I haven’t slept much and mentally, I’m in pieces,” he said. “Because of my past, I feel great responsibility in coaching this club.”