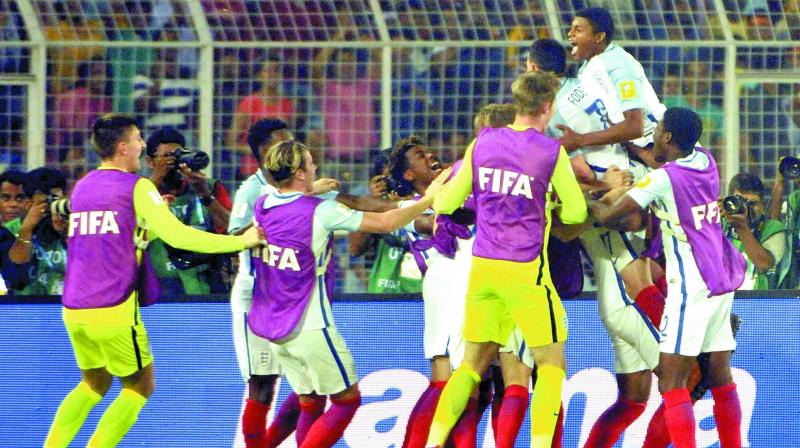 England’s Philip Foden celebrates his first goal against Spain in their Fifa U-17 World Cup final at the Salt Lake Stadium in Kolkata on Saturday. The Young Lions won 5-2. (Photo: Pritam Bandyopadhyay)

Kolkata: High-stake finals rarely produce a flurry of goals. Not the Under-17 World Cup though, which produced seven finely-taken goals on Sunday as England emerged triumphant from the throbbing contest against Spain which belied the fact that the players in action are still kids.

After their Fifa U-20 World Cup and Uefa European U-19 Championship crowns, it was England’s third title in their fourth youth-level final in 2017.

It was all the more creditable as they overturned a two-goal deficit here at the packed Salt Lake Stadium, to pump five past a shocked Spain, who had beaten them in the U-17 Euros in May.

They had begun with a bang, creating a chance in the opening minute, Morgan Gibbs White forcing Alvaro Fernandez in to save after an ominous run into the box.

Emphasis on building from the right channel at high pace, was evident in the early stages.

Spain were forced to quicken the pace of their build-up play, their approach rewarded with the opening goal.

Cesar Gelabert, in between two defenders, chested down Juan Miranda’s inviting cross from the left onto the path of Sergio Gomez, who deftly put it in.

Action unfolded at blistering speed, the ball moved from one end to the other in seconds, keeping players on their toes.

Spain preferred operating from the left, and England from the right through Callum Hudson-Odoi.

Gomez ensured an earlier miss by Mohammed Moukhliss was an aberration, smartly controlling Gelabert’s dinked-in ball inside the area and promptly taking a booming left footer in to the far corner.

The Barcelona product’s goals, were a wonderful combination of quick thinking and dynamism that put Spain in the driving seat.

England’s sagging morale would have lifted had Hudson-Odoi’s right footed curler gone in, instead of thundering off the post in the 43rd.

Brewster provided the spark a minute later, nodding home a Steven Sessegnon cross from close range to leave the match delicately poised at half-time. An early goal after the break was England’s need of the hour.

They pulled level two minutes before the hour mark from a nice combination play involving Foden, the move’s instigator, Sessengon and Gibbs White, who provided the finish.

Five goals in 70 minutes warmed up the contest to an intriguing final phase of action.

The initiative fell to Spain, who might have made it 3-3 but for Sessegnon’s goal line save, after which they disintegrated.

They just couldn’t cope with England’s unrelenting aggression and disconcerting pace, which left their defenders ragged in the final phase of the absorbing contest.

After letting in the fourth goal they could see the writing on the wall, and lost their heads, getting involved in unnecessary scuffles.

But the focus deservedly was on the English players, particularly Foden, the creative fulcrum of the team, leaving the 66,684 in attendance wondering how many future stars they had witnessed on the night, which will proudly feature in their ‘I-have-been-there’ recollections years later.