The Underdogs will now face England in the Quarterfinals 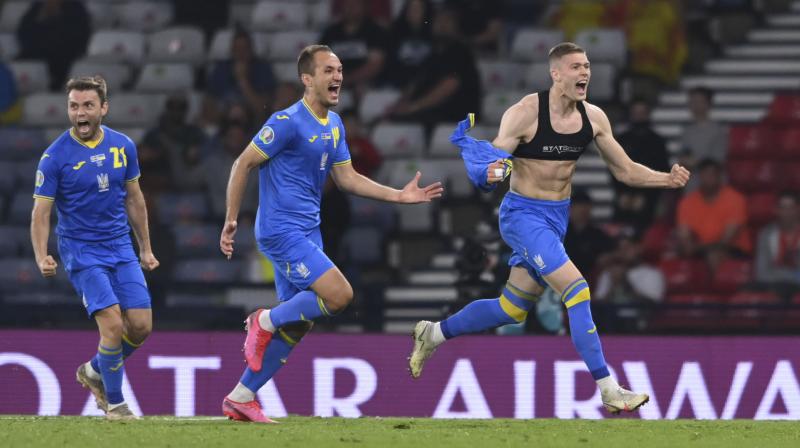 Ukraine's Artem Dovbyk (right) celebrates with teammates after making it 2-1 against Sweden in the final Round of 16 clash of Euro 2020 at the Hampden Park Stadium in Glasgow, Tuesday. (Photo: AP)

Glasgow: Artem Dovbyk's header in the 121st minute sent Ukraine through to a Euro 2020 quarter-final clash with England as they beat Sweden 2-1 after extra time in Glasgow on Tuesday.

Ukraine squeezed through to the last 16 despite taking just three points in the group stage, qualifying in part because Sweden beat Poland to top Group E ahead of Spain.

But Andriy Shevchenko's side were determined to show they deserved their place in the knockout phase as Oleksandr Zinchenko fired them into an early lead.

Emil Forsberg's deflected strike brought Sweden level before half-time and the RB Leipzig midfielder twice hit the woodwork in the second half.

However, a red card for Marcus Danielson nine minutes into extra time left Sweden hanging on for penalties until Dovbyk latched onto Zinchenko's inviting cross to spark wild scenes of celebration among the small band of Ukrainian fans at Hampden Park.

"With this performance and commitment, our team has deserved the love of the whole country," said Shevchenko, who in the last eight will return to Italy where he enjoyed the best years of his stellar playing career with AC Milan.

Shevchenko said before the game his side had already achieved their objective by making it through the group.

But the former Ballon d'Or winner got the reaction he desired after a disappointing 1-0 defeat to Austria in their final group game with a fast start.

Andriy Yarmolenko has been his country's driving force all tournament, scoring or assisting in all but two of their six goals.

The West Ham United winger's teasing cross with the outside of his left foot fell kindly for Zinchenko on 27 minutes and the Manchester City man drilled in a low shot that had too much power for Olsen.

Zinchenko will come up against a number of his club teammates in the quarter-final, and he urged Ukraine to believe they can make history by reaching the semi-finals of a major tournament for the first time as an independent nation.

"I know a lot of those players personally," said Zinchenko. "They have a really good set of players, their substitutes bench probably cost the same as three Ukrainian teams.

"This should not scare us, this should motivate us. I sense myself that everything is possible in this life and we will try everything for it."

Forsberg has been just as influential for Sweden as Yarmolenko for Ukraine and he equalised two minutes before the break with his fourth goal of the tournament.

He then hit the woodwork twice after the break, curling a shot onto the base of the post before a more powerful effort from the edge of the box cannoned back off the bar.

In between times, Georgiy Bushchan produced a stunning save to tip over Dejan Kulusevski's dipping shot.

"In the second half we had four great chances, hitting the post and crossbar," said Sweden boss Janne Andersson.

"It felt like we would score eventually, but unfortunately we didn't and in the extra time it went the way it did. The red card really decided the game."

Danielson won the ball but followed through with a dangerous challenge on Artem Besedin that forced the Dynamo Kiev striker to come off with a serious knee injury.

Yarmolenko also had to be replaced midway through extra time in what will be a concern for Shevchenko if Ukraine are to have any chance of shocking England in Rome.

But his replacement Dovbyk was the hero as he chose the perfect time to score his first international goal.