The Poland forward has scored 197 goals in 246 matches in all competitions since joining from Borussia Dortmund in 2014. 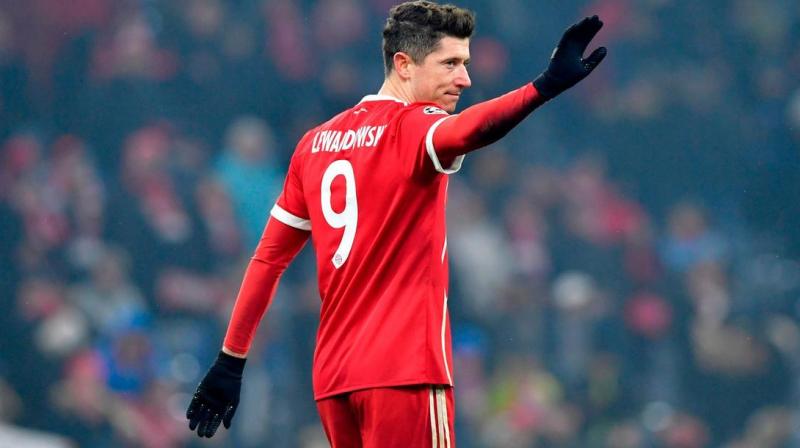 Bayern Munich striker Robert Lewandowski signed a two-year contract extension on Thursday that will keep him with the German champions until 2023. (Photo:AFP)

Berlin: Bayern Munich striker Robert Lewandowski signed a two-year contract extension on Thursday that will keep him with the German champions until 2023.

The Poland forward, who has netted all five of Bayern’s league goals this season, has scored 197 goals in 246 matches in all competitions since joining from Borussia Dortmund in 2014.

He is third on the club’s list of all-time scorers behind Gerd Mueller (398) and Karl-Heinz Rummenigge (217) and has already become the Bundesliga’s all-time best foreign scorer with 207 league goals (for Bayern and Dortmund combined).

“Bayern has become my sporting home,” the 31-year-old said in a club statement.

“I am convinced that we can achieve a lot in the coming years. Bayern are one of the three biggest clubs in the world and have a superb squad. I am proud to be a part of this club.”

Lewandowski has won five league titles with Bayern as well as two German Cups and he has also won another two Bundesliga trophies with Borussia Dortmund before moving to Munich.

He has also been the league’s top scorer in four of the last six seasons, including the last two.

“Robert is in my opinion the world’s best centre forward and for years has been a pillar in our team,” said club CEO Rummenigge.

“That is why we are delighted that he will keep playing for Bayern a long time. We are certain that with Robert we can achieve our high goals in the coming years.”

The Bavarians, who have won the last seven league titles, are on four points from two games in the Bundesliga this season.