The uniformity for training coaches, sports medicine, sports science and psychology brought greater transparency in functioning at all levels. 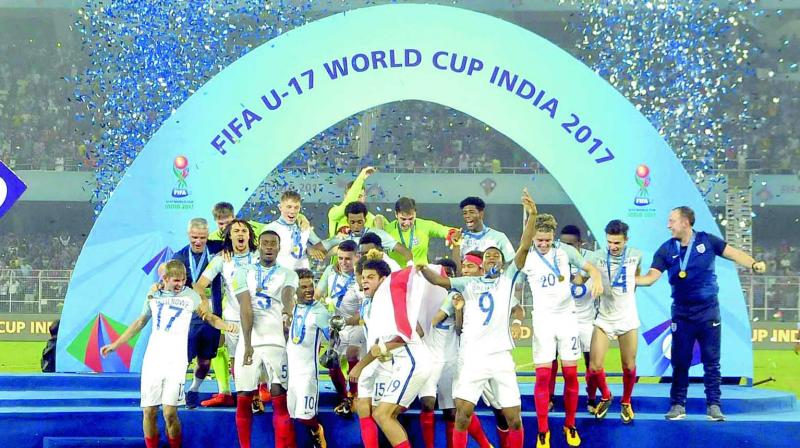 England enjoy their moment to the hilt after winning the Under-17 World Cup final in Kolkata on Sunday. (Photo: Pritam Bandyopadhyay)

Kolkata: The contrast in England’s performances at youth and senior levels is such that their Under-17 World Cup success raises as much fear as hope about their future.

Winning three international football titles in any age category within a year is no mean achievement, but is as rare as England performing well in senior World Cups. Their senior national team have not qualified for the semi-finals of a major tournament since 1996, when they hosted and won the World Cup.

Few Premier League clubs put faith in domestic talent, which has contributed to their relegation to being mere pretenders rather than title challengers. This is why any expression of their optimism is always taken with a pinch of salt. But the manner of their triumph in India exhibits a refreshing change in their attitude that has started to pay dividends.

Cajoled into formulating a detailed roadmap similar to fellow European countries in 2011, Spain and Germany being the most prominent, the Football Association adopted holistic changes to attitude, focusing on technique, fitness and skill rather than physicality and brute power. Spending £105m for a 330-acre national centre of excellence at St George’s Park, Staffordshire, in 2012 was aimed at raising standards of play at all levels.

The uniformity for training coaches, sports medicine, sports science and psychology brought greater transparency in functioning at all levels. The current U-17 lot was assembled in 2014. They have the world at their feet now but questions over pathways arise given the fortunes of England’s 2014 winners.

Progression as professionals in the coming years will be crucial. And it is where the gloom behind the boom surfaces. Among England’s Under-17 Euro winners in 2014, only Bournemouth midfielder Lewis Cook has started a Premier League game this season. The contrast with other countries is distinct.

Cook’s fellow players of other countries who featured in the Malta tournament have gone on to become full internationals, Germany’s Benjamin Henrichs and Portugal’s Renato Sanchez being prime examples, the latter even winning the Euro 2016 with the senior side. It indicates dearth of opportunity rather than talent is preventing young lions from breaking through. It also mutes voices of English players “not being good enough”.

No South American team have won the senior World Cup in the last three editions, the best clubs all play from Europe and the superiority of other continents at the age-group shows signs of waning. England have a narrow window and must act quickly to capitalise on it.

Rhian Brewster, Philip Foden and others will be back to the daily grind at their respective English clubs. Jadon Sancho has migrated to Germany’s Borussia Dortmund for development.

The fortunes of Sancho with his England-based team mates will be keenly followed and could provide pointers of how the “money-bagged” English clubs should treat their own.

History suggests age-level success doesn’t necessarily translate to the highest level, only Spain’s Cesc Fabregas and Mexico’s Carlos Vela have shone in the top tier after winning the Golden Boot in U-17 World Cups since the new millennium began.

The FA has expressed concern over the dwindling numbers of England-qualified players in the Premier League, identifying integration of youth players into the first team as a deficiency.

The FA wants England to win the 2022 World Cup and reach the Euro 2022 semi-finals. For that mission to be fulfilled, the governing body wants to work “hand-in-hand” with the Premier League to address national team concerns.

“This is the development team, we’re building for the future. Nobody is going to get carried away. Expectations will obviously rise now but we have a long-term plan, we’ll stick to the plan. Through thick and thin we have had a long term vision and goals of winning World Cups and Euros at senior level and we’ve had a good start here,” England U-17 coach Steve Cooper said after their winning on Saturday.

We have to wait for a few years to see if England can build on the solid foundation they have laid for themselves.