Unai Emery pens emotional goodbye after getting sacked by Arsenal

Arsenal had sacked Emery as the coach on Friday after the team continued to show negative results. 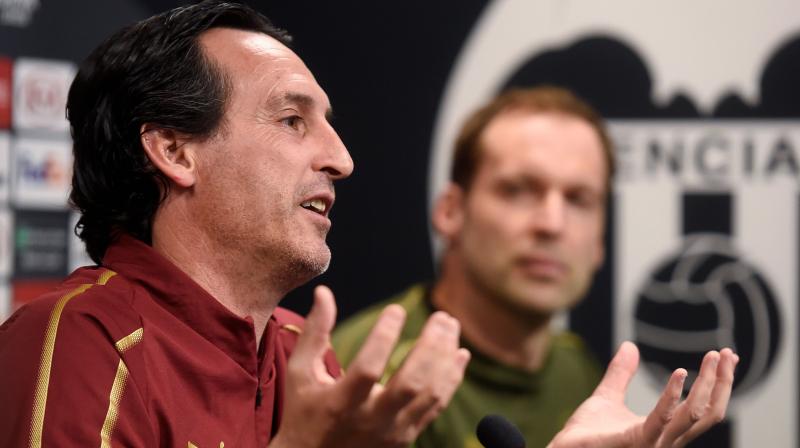 Arsenal fans were constantly seen asking for the sacking of Unai Emery as the club failed to win matches in the Premier League. (Photo: AFP)

London: After getting sacked as the coach of English Premier League side Arsenal, Unai Emery penned down an emotional letter to thank the fans for their constant support towards the club.

Arsenal had sacked Emery as the coach on Friday after the team continued to show negative results. The side is currently going through a seven-game winless streak.

"It has been an honour to be the Arsenal head coach. To all the fans, I want to thank you all from the bottom of my heart for helping me to understand and feel the greatness of Arsenal. I want to tell all of you that I have worked with passion, with commitment and with effort," Arsenal's official website quoted Emery as saying.

"I would have liked nothing more than to have achieved better results for you. It has been a year and a half full of emotions, of great moments and some other more bitter ones, but not a single day has gone by without me stopping to think about how lucky I have been to work for this club with these players and their professional and personal qualities," he added.

However, Arsenal fans were constantly seen asking for the sacking of Emery as the club failed to win matches in the Premier League.

Hashtags like #EmeryOut and #UnaiEmeryOut were trended by Arsenal fans worldwide.

The side is currently placed at the 8th position in Premier League with 18 points from 13 matches.

Arsenal is yet to name a full-time replacement for Emery, but the side confirmed that the search is underway for finding the right man for the job.

"The search for a new head coach is underway and we will make a further announcement when that process is complete. The decision has been taken due to results and performances not being at the level required," the club had said in a statement.

Arsenal will next play against Norwich City in the Premier League fixture on December 1.