Colombia are second in the standings on 24 points while Uruguay and Chile occupy the other two automatic spots on 23 points. 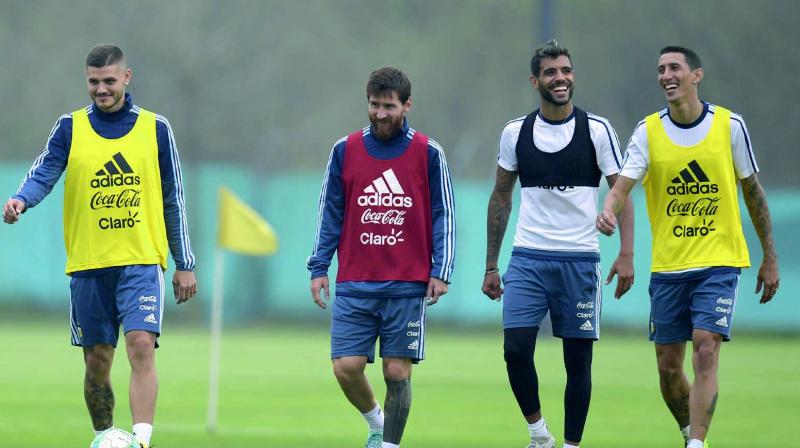 Montevideo: Luis Suarez could yet line up against Barcelona team-mate Lionel Messi on Thursday as South America’s battle for 2018 World Cup places resumes with Argentina’s trip to Uruguay the pick of the fixtures. With leaders Brazil already locking up their place at next year’s tournament, attention turns to the tussle for the three remaining automatic berths on offer in the marathon 10- team qualifying tournament. Colombia are second in the standings on 24 points while Uruguay and Chile occupy the other two automatic spots on 23 points.

It means that fifth-placed Argentina have little margin for error as they head to Montevideo’s Estadio Centenario for the latest instalment of their historic rivalry with the Uruguayans. Jorge Sampaoli, who masterminded Chile’s victory at the 2015 Copa America, took control of the ‘Albiceleste’ in May, and began his reign with a morale-boosting 1-0 win over Brazil in a friendly in June.

Sampaoli served notice of his determination to invigorate Argentina’s ranks by axing striker Gonzalo Higuain in favour of Inter Milan’s Mauro Icardi. Icardi is expected to start at the apex of a front three with Messi and Juventus prodigy Paulo Dybala lurking just behind.

Argentina’s path to Russia has been complicated by the Court of Arbtitration for Sport ruling on Tuesday that confirmed a sanction against Bolivia for fielding an ineligible player in their September 2016 0-0 draw with Chile. Fifa later converted that result to a 3-0 win for Chile, a ruling that means Sampaoli’s former team now have a one- point advantage over the fifth-placed Argentines.

Uruguay are sweating on the fitness of Barcelona star Suarez. If Suarez fails to win his fitness battle, Uruguay will once again turn to in-form Paris Saint-Germain striker Edinson Cavani, who is the top scorer in the qualifying competition with nine goals.

Elsewhere, second-placed Colombia will aim to edge closer to qualification with an away victory over already-eliminated Venezuela. Fourth-placed Chile host Paraguay while Brazil will have the luxury of being able to treat their game against Ecuador in Porto Alegre as a training exercise.