Rashford had given a near full-strength United a deserved halftime lead from the penalty spot after Welshman Daniel James had been fouled. 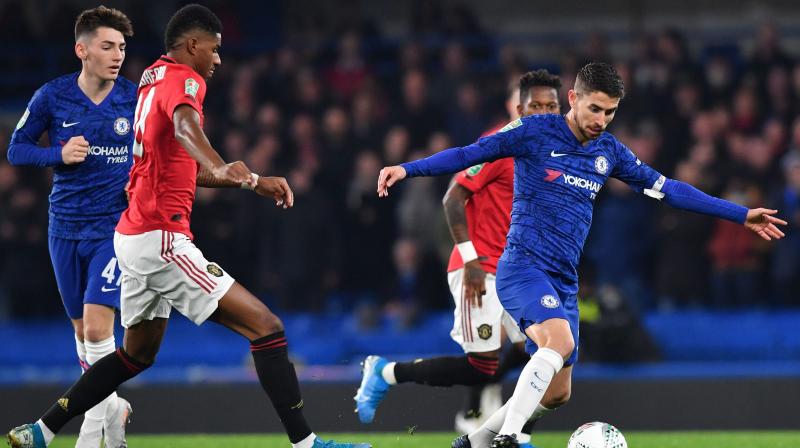 Marcus Rashford’s 'bolt from the blue' stopped resurgent Chelsea in their tracks as his sensational free kick fired Manchester United into the League Cup quarter-finals with a 2-1 victory at Stamford Bridge on Wednesday. (Photo:AFP)

London: Marcus Rashford’s “bolt from the blue” stopped resurgent Chelsea in their tracks as his sensational free kick fired Manchester United into the League Cup quarter-finals with a 2-1 victory at Stamford Bridge on Wednesday.

With 73 minutes on the clock and Chelsea beginning to dominate after Michy Batshuayi’s superb equaliser, Rashford lined up a free kick 40 metres out and sent the ball dipping and swerving past a helpless Willy Caballero.

Rashford had given a near full-strength United a deserved halftime lead from the penalty spot after Welshman Daniel James had been fouled by Marcos Alonso.

Ole Gunnar Solskjaer’s side held out reasonably comfortably to claim a third successive away victory having previously not won on the road since March.

It was United’s second win over Chelsea this season, having beaten them 4-0 on the opening day of the Premier League.

Since then Frank Lampard’s youthful Chelsea side have responded superbly and had won their last seven matches in all competitions to move into the Premier League’s top four.

United, however, have laboured since but there are encouraging signs that they are beginning to hit their stride and Solskjaer appears to have targeted the League Cup.

He made only four changes to the side that started in the 3-1 win at Norwich City at the weekend, with 19-year-old Brandon Williams the only unfamiliar face.

“We’ve been leading 1-0 in many games and not kicked on. Today we were excellent, with fast flowing football. That’s Manchester United. We’re trying to get back to that,” Solskjaer said. “Marcus has that strike in him.

“I’ve seen him in training so many times.”

Lampard said Rashford’s free kick had been a bolt from the blue.

He felt the game was theirs for the taking after Batshuayi, scorer of the winner at Ajax last week, ran from the halfway line before holding off a tackle and coolly dispatching a low shot into the bottom corner.

“No team can stop that,” he said. “We weren’t at our best in the first half, we were a little slow with our passing, but I loved the first half hour of the second half.”

Chelsea have lost three games at Stamford Bridge in all competitions this season, one more than they did in the whole of the 2018-19 campaign. But Lampard was not too downhearted.

“I saw a lot of things that were good for us for the future, a lot of positives,” he said. “I hate losing, we all do here, but it’s clear there is a big picture and there are a lot of big games for us to come and a busy fixture list.

“Now we move on and focus on what is to come.”

The draw for the quarter-finals is on Thursday in which United will be joined by Manchester City, Liverpool, Aston Villa, Leicester City, Everton, Colchester United and Oxford.