Doughty drive, baby on board

Koneru Humpy on a high after mother of all wins. 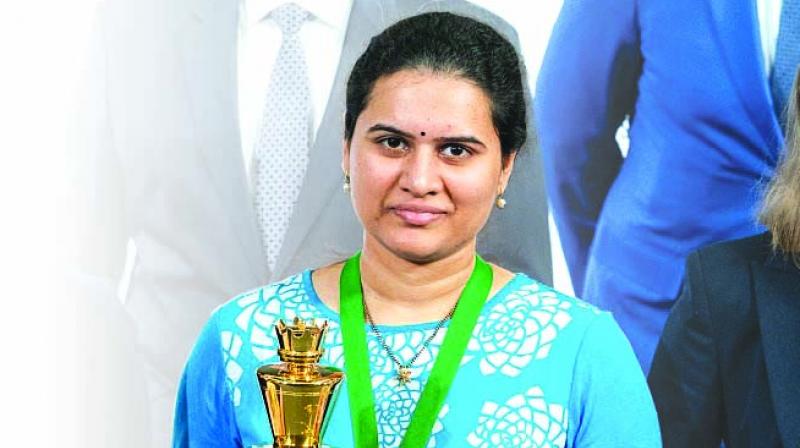 Koneru Humpy poses with her trophy after winning the World Rapid Chess Championship in Moscow.

Hyderabad: Chess champion Koneru Humpy is over the moon. Understandably, after pulling off the mother of all wins by capturing the women’s World Rapid chess title in Moscow to cap a brilliant year after coming back from motherhood.

It’s been an emotional rollercoaster for the Grand Master, who has had to travel to tournaments leaving her year-old daughter Ahana (now two) with her parents in Vijayawada, Andhra Pradesh. The 32-year-old, who took a two-year sabbatical from 2016 to 2018 to have a baby, spoke to this newspaper about the challenges in her second innings. Excerpts from an interview:

Q. How strenuous was it to get back on to the chess circuit?

It was really difficult because when I came back I played the strongest tournament, the Chess Olympiad, and then I took part in the Women’s World Knockout Championship and the World Rapid-Blitz. I had a disastrous performance in all three. The Olympiad was not that bad but I was completely outplayed in both the World Championships. After being a top bracket player if you fail like this, it is not easy to cope with. It was a very tough time for me psychologically.

But I think my hardwork has paid off finally because for the last one year, I have been trying to manage whatever time I could get, to utilise it for chess. That was helpful. It was a dream for me to become a world champion, ever since I started playing chess as a six-year-old. However, I never thought I would be champion in the Rapid format… because I was always strong in Classical. I was expecting that one day I would the World title in the Classical event but this came as a surprise to me. I think my determination towards the end of the tournament where I needed crucial points (and won them with precision) turned it for me.

Tell us about the challenges you faced...

There were many, for I did not have any touch with chess for almost two years. Even when I was expecting my child, I was on bed rest for a few months so I was not following any news or games at all. So it was like I had started to learn everything all over again as there were many things happening, like in Openings there were lot of updates. I ones which I had prepared for were outdated and not working anymore! When I played my first Grand Prix it was really tough. I had to work a lot. I used to play five to six hours a day but I also needed an equal amount of time to prepare, it was very tiring.

I also had very short sleeps when I played these tournaments because I had to work quite a bit but finally, when you succeed at the end of the day, you forget all those things.

When did you think of coming back on?

I always wanted to continue playing chess, but had to keep away from the game because of some medical complications while I was pregnant. After that I needed to be with my baby for one year until she grew up a bit as I decided she was priority… after that I did come back to the chess board. That was very well planned in advance, I never wanted to take a break but for my medical condition.

How difficult was it to keep abreast of the fast-changing developments in the chess world?

With this computer technology, once you play a game that’s it, it won’t work again to use the same line, you need to find new things. That was quite a task, moreso because I was preparing on my own — I don’t have a second or a coach.

What goals did you set for yourself when you started your second innings?

When I returned to the circuit, my first objective was not to lose my rating. I thought if I sustain my rating for the first year that itself should be a good result. You know, playing at such a world class level with professionals, it’s important to stay in the field. But I think I came back very fast — within one year I won a couple of Grands Prix, this World title and 30 rating points, which was not expected.

What kind of assistance have you got from your family?

My husband is very supportive. He always encourages me to play tournaments… he’s not the kind of person who wants me to sit back home and look after things. He gives that kind of freedom. Even when I am home, he helps me out in household work when needed. He’s very helpful and understands that I need some space to work and gives me that.

My father (Koneru Ashok) has been my coach from childhood. Till today, he is the one who discusses strategies that I need to use against specific players. We speak every day when I am playing tournaments. He is like a mentor to me. He always gives me the suggestions when it comes to psychology and theory parts.

When I am travelling, my parents look after my daughter, who has bonded very well with her grandparents! That makes it a bit easy for me. Earlier, my father or mother used to accompany me on tours, now my daughter needs them! (laughs)

How emotionally draining is it to say goodbye to your child ahead of tours?

It’s actually a very tough situation but now that she’s a bit grown up she understands a little. She asks for me all the time. While I was packing my bags the day before coming to Moscow (for the Worlds) she understood that I was going to be away for a while and began to cry — I got very emotional there, but composed myself. I have to overcome these emotions and be strong… probably she will also understand as she grows. Yes, but it’s really tough to leave such a small child and travel for so many days.

I make video calls to be in touch with her once in a while, but most of the time the schedule is so tight during tournaments. Yesterday, by the time I finished my games it was already 11.30 pm in India — she would’ve slept by then.

How difficult is it for a mother to keep away from her two-year-old baby and concentrate on a game of chess, which is so intense?

You need to be very tough mentally to be able to do that… otherwise it’s impossible to move pieces on the board. When I began playing after the break, I felt very lonely and used to question myself if I was giving my 100 per cent as a mother, and the answer always would be ‘no,’ for she was such a small baby. But then, the desire to achieve something more professionally pushes you that little bit and prepares you to sacrifice a few things.

Where do you draw this strength from?

I’ve always had high levels of determination and that’s what keeps me going. I tried to maintain physical activity too. Every day, I spend about 45 minutes to an hour for it.

Are there any mothers in the sporting world who inspire you?

Mary Kom (boxer) definitely is on top of that list. I feel to be active in her sport after motherhood is much more difficult. Being a mother and then getting back to the boxing ring is not a small thing, but she has done it. I see Serena Williams too has done well after returning to the tennis court after becoming a mother. She’s another sportswoman-mother I look up to.

Have you started teaching your daughter the chess moves?

Not yet… but she once saw the chess pieces and somehow learnt the word Bishop. While reciting the English Alphabet, she says ‘B for Bishop,’ and we just can’t stop laughing.

What are your plans for the year 2020. Have you set yourself any goals?

Right now I am not setting any targets for myself. I just want to play my game, enjoy it and take whatever comes my way. When the opportunity comes up, I would like to grab it. Currently, I’m leading the Grand Prix series and will concentrate on that and see how it goes.