Anju and Valson claimed to have raised the matter in government meetings but with little luck. 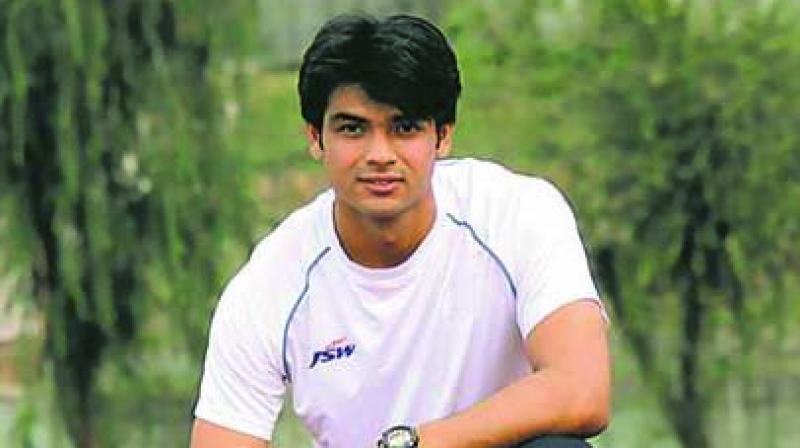 Javelin thrower Neeraj Chopra is expected to put up a good show at the Commonwealth Games.

New Delhi: India have hopes of a marginal increase in their medal count from athletics at the forthcoming Commonwealth Games despite athletes playing second fiddle to the glamorous Indian Super League football tournament which had monopolised several stadiums around the country.

The country claimed three medals in athletics — gold and silver in discus throw and a bronze in triple jump at the 2014 CWG in Glasgow — and the Athletics Federation of India is positive of overhauling that mark this year at Gold Coast in Australia.

“Last time India won three medals. This time we hope to win four or five. “We will be happy if we achieve that mark,” C.K. Valson, Athletics Federation of India secretary told this paper, on the sidelines of an event where analytics based sporting platform Run Adam became the title sponsor for the 22nd Federation Cup, to be held in Patiala from March 5 to 8.

“We expect good performances from javelin thrower Neeraj Chopra, race walkers Irfan Kolothum Thodi, Manish Singh, discus thrower Seema Punia Antil, who won silver at Glasgow, and long jumpers Neena Varakil and Nayana James. In men’s triple jump also we have a chance of being on the podium,” he added.

Former long jumper Anju Bobby George was also bullish about medal prospects of the country’s athletes at the competition, scheduled to roll out from April 4 to 15.

“We can win three or four medals, we should be really happy if we perform better than that,” the 2003 Paris World Championships bronze medallist told this paper.

Tempering the positive vibes are complaints of hampered preparations due to the ISL restricting usage of stadiums.

They also vented their ire on the sports ministry for denying permission for stadium usage to host national championships in cities where ISL matches are being held.

“Football has taken over everywhere, there is no place for athletes to train and compete. Delhi’s Jawaharlal Nehru Stadium, Kanteerava in Bengaluru and Chennai’s JLN Stadium, Salt Lake Stadium in Kolkata and Kochi’s JLN cannot be used as venues for the football tournament. The athletes are left with very little choice. It is very sad,” Anju said.

“Only one sport cannot enjoy using stadiums for six-seven months. But because of the ISL we are not being allowed to use what are basically athletics-oriented stadiums,” Valson said.

The AFI wanted to host this year’s Federation Cup, which will serve as the final qualification trials for the CWG for over 700 athletes, at the JLN Stadium in Delhi but was forced to shift it to Patiala due to the ISL, after shifting it to the same venue last year when they were told to conduct the field events (shot put, javelin and discus) at adjacent training grounds.

ISL franchises have coughed up huge sums of money to book stadiums and maintain the playing turf, denying athletes use of the pitch even for practice.

Anju and Valson claimed to have raised the matter in government meetings but with little luck.

“The Khelo Games were held at Delhi as it was the union government’s brainchild, but athletes are not even allowed to practice at the grounds.

“The government has to choose between commercialisation of sports and investing in the hope of international medals,” Valson said.