The trio will attempt to vault 5.00m as many times as possible in 30 minutes, a format the trio drew up in the face of absence of officials 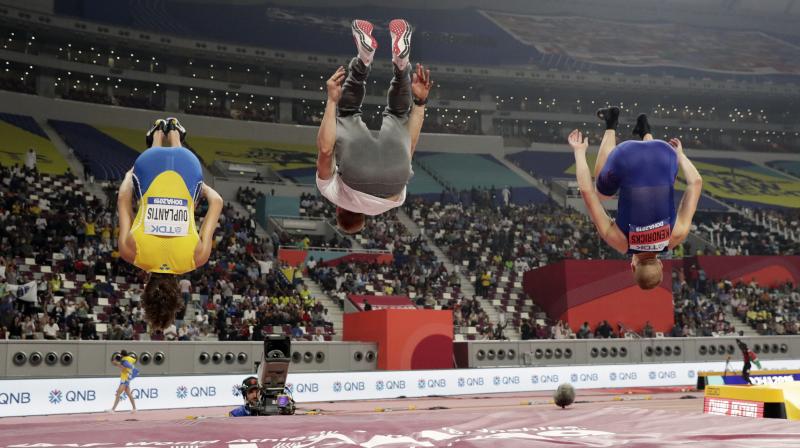 Armand Duplantis of Sweden (L), Piotr Lisek of Poland (C) and Sam Kendricks of the United States do flips after the the men's pole vault final at the World Athletics Championships in Doha, Qatar. AP Photo

London: Three of the world's top male pole vaulters will meet in a competition on Sunday in what has been dubbed the ‘Ultimate Garden Clash’, with world sports decimated by the coronavirus pandemic.

World record-holder Mondo Duplantis of Sweden, two-time world champion Sam Kendricks of the United States and 2012 Olympic champion Renaud Lavillenie of France will be connected via a live video link as they compete from their own back gardens.

The event, which will be streamed by World Athletics, is scheduled to start at 1500 GMT and will span three locations: Lavillenie will vault from his home in Clermont-Ferrand, Kendricks will compete from his back garden in Oxford, Mississippi, and Duplantis will take part from his base in Lafayette, Louisiana.

The three vaulters will attempt to vault 5.00m as many times as possible in 30 minutes, a format the trio drew up in the face of a lack of officials.

"I'm ecstatic to be able to compete again, especially against Sam and Renaud," said Duplantis.

"Since it's unknown what other competitions we will all have together, we definitely are going to enjoy this and have a good time with it. Also, winning this is crucial because I don't like losing to them very much."

Lavillenie added: "This is a superb opportunity to see the best jumpers in a new competition format showing their love for their sport with a competition when most other sports are off."

Kendricks said it would be a question of "learning as we go".

"No matter how precise and accurate we are, I think the challenge is we don't know what it will take to win, so it will be hard to gauge our effort."