Manuel Glave, a Peruvian chess lover present during the museum excursion, also knew about our Prag. 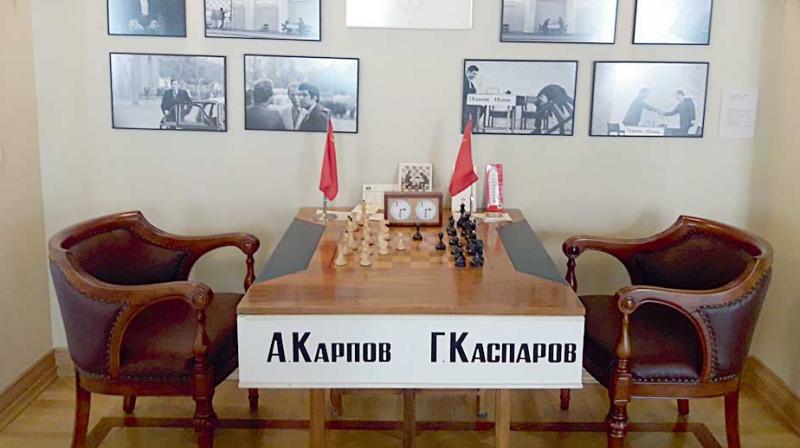 Artefacts of the 1984 world chess championship match between Anatoly Karpov and Garry Kasparov on display.

Moscow: The world chess championship in the 1980s was all about the interminable battle of attrition between two Soviet players, a morose Anatoly Karpov and the exuberant Garry Kasparov.

Their championship series in 1984 never looked like ending after 48 games, so the organisers called it off after five months, keeping the well-being of the players in mind. The table, the flags and the clock that witnessed the historic series are kept intact at a premier chess museum in Moscow.

A beautiful, quaint building on Gogolevskiy Boulevard near the imposing Cathedral of Christ the Saviour houses invaluable chess artefacts.

It’s not merely a museum, the 200-year-old classical structure has also seen Mikhail Tal, Mikhail Botvinnik, Bobby Fischer, Karpov, Kasparov, Viswanathan Anand and Magnus Carlsen rake their brains over a move on a square board.

The lively museum supervisor, Dmitry Oleynikov, said Carlsen’s fierce competitiveness came to the fore when the Norwegian prodigy took part in a tournament here a decade ago.

“He couldn’t come to terms with finishing second, so he left the runner-up cup here. It is now a valuable part of our legacy,” he said, laughing.

The building, originally owned by noblity, was a shelter for Jews fleeing Nazi persecution in many European countries in the 40s. It became a nerve centre of chess in 1956 mainly due to the efforts of former world champion, Vasily Smyslov.

Top Soviet players could lay their hands on key games played all over the world through a perceptive card system there, which is very much like today’s search engines.

After receiving priceless chess pieces, posters, books and other memorabilia from a private collector named V. Dombrovsky, the museum with its beautiful ornate halls steadily grew in stature in the 70s and 80s.

After renovation in 2014, the goldmine of chess memorabilia opened its door to the public.

It is now home to the Russian Chess Federation, Botvinnik Central House of Chess, the office of 64Magazine, a chess school for children and the museum. Tournaments are conducted regularly and anyone can take part in them for a small fee.

From some of the oldest books on the game and tournament posters from 1930, the museum also showcases chess pieces made from camel’s bones and walrus tusks. Closer attention is certain to enrich one’s knowledge on culture and history. A 400-year-old golden chess board from Ethiopia has a pride of place.

An exquisite collection of pieces made of ivory has an intriguing story. It was gifted by Chinese leader Mao Zedong to V. Vasilenko, a Russian doctor, for helping him recover from a gastric ailment. But Soviet leader Jozef Stalian wasn’t pleased and arrested the doctor on charges of sabotage upon his return from China. Stalin’s death reunited Vasilenko and Mao’s gift.

Another highlight of the museum is the first chess set that travelled to space. An engineer designed a special set with grooves and rails in which the pieces had to be inseparable with the board to prevent them from flying on account of zero gravity.

The first Earth vs Space chess match was played on June 9, 1970 and the occasion was special for the Soviet Union, which always loved its chess and space odyssey.

The museum supervisor was glad to know that this reporter was from Chennai, the hometown of R. Praggnanandhaa who had recently become the second youngest GM in the world.

Manuel Glave, a Peruvian chess lover present during the museum excursion, also knew about our Prag.

“My only problem with the boy is his name,” Glave said, laughing.