The Suns rebounded at the Staples Center with an emphatic win, taking the best-of-seven series 4-2 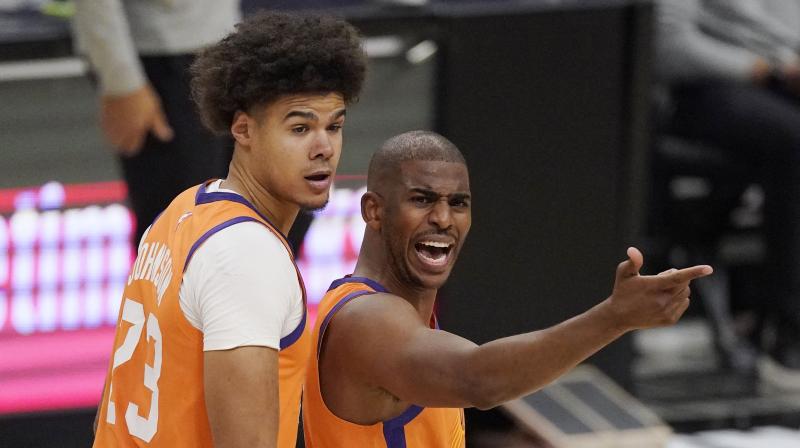 Los Angeles: Chris Paul erupted for 41 points to lead the Phoenix Suns into the NBA Finals on Wednesday with a series-clinching 130-103 victory over the Los Angeles Clippers.

The Suns -- who squandered the opportunity to wrap up the Western Conference Finals at home on Monday -- rebounded at the Staples Center with an emphatic win, taking the best-of-seven series 4-2.

Phoenix will face either the Milwaukee Bucks or Atlanta Hawks in the best-of-seven championship round.

It is only the third NBA Finals appearance in franchise history for the Suns, and the team's first since 1993.

They failed to even reach the playoffs for 10 consecutive seasons before the 2020-2021 campaign.

Paul was the architect of the Suns' win. The 36-year-old, 11-time NBA All-Star drew on all of his experience to get Phoenix over the line.

Wednesday's win finally gives Paul the chance to shed his tag as one of the greatest players in NBA history to never win a championship.

In 16 glittering seasons in the league, Paul has never reached the NBA Finals in a career littered with near-misses during spells with the New Orleans Hornets, Los Angeles Clippers, Houston Rockets, Oklahoma City Thunder and Phoenix Suns.

"Damn this feels good," said Paul, who joined the Suns last year from Oklahoma City. "It has been a lot of work, going to a new team, everybody staying the course.

"Sixteen years of this, 16 years of surgeries, of hard work, of losses -- bad losses. We're going to enjoy tonight.

"I'm just so happy for all the people around me. To do it here against a team I have the utmost respect for -- I'll always be a Clipper. I love these fans."

"If you can learn anything from Chris Paul, it's to keep going," Williams said. "Don't quit. Serve others. He cares about his teammates."

The Suns looked to be cruising to victory after jumping to a 17-point lead near the end of the third quarter.

But the Clippers came roaring back with 10 unanswered points to cut the lead to seven, Nicolas Batum's three-pointer rousing the home fans into thinking another comeback was on the cards.

Paul took that rally as his cue to impose himself on the contest, rattling off eight points without reply to restore a healthy cushion at 97-82.

A four-point play from Paul midway through the fourth quarter took the Suns to a 19-point lead at 111-92, and there was no way back for the Clippers.

Another Paul three-pointer put the Suns 118-92 ahead, and the Clippers' Patrick Beverley boiled over -- shoving the veteran to the ground and promptly being ejected from the game.

Paul's 41-point effort was backed with double-digit contributions from Devin Booker with 22 points, Jae Crowder with 19 and Deandre Ayton with 16.

"When we channel our energy the right way we can make big things happen like tonight," Booker said afterwards.

The Clippers had been battling against the odds throughout the playoffs, losing both talisman Kawhi Leonard and Serge Ibaka to injuries.

Coach Tyronn Lue declined to speculate on what might have been with a healthy roster.

"There's nothing you can do about it. It's part of the game," Lue said. "Our team shows a lot of character. We're down. No pointing fingers, we're sticking together."