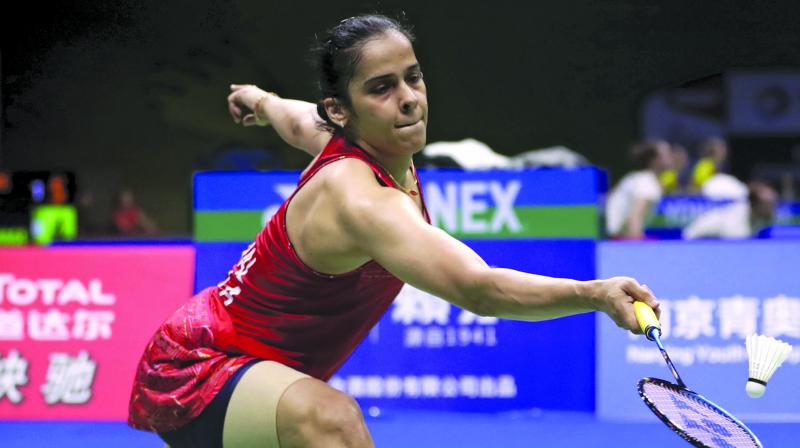 Saina, who had a silver and a bronze in earlier editions of the championship, defeated Turkey’s Aliye Demirbag 21-17, 21-8 in the second round to set up a pre-quarterfinal clash with 2013 champion Ratchanok Inthanon of Thailand.

Saina had received a bye in the first round.

Fifth seed Srikanth dispatched Ireland’s Nhat Nguyen 21-15, 21-16 in his campaign opener to join compatriots H.S. Prannoy, Sameer Verma and B. Sai Praneeth, who received a walkover after his opponent, Korea’s Son Wan Ho, pulled out in the second round. Srikanth faces Spain’s Pablo Abian next, while Praneeth will meet another Spaniard, Luís Enrique Penalver.

Satwiksairaj Rankireddy and Ashwini Ponnappa staved off a challenge from 15th seed German pair of Mark Lamsfuss and Isabel Herttrich, registering a 10-21, 21-17, 21-18 win to enter the pre-quarterfinals.

Japan’s Kento Momota made a blistering start to his campaign, swatting aside Ukraine’s Artem Pochtarov 21-13, 21-12, Momota said: “I don’t take the attention at home and abroad as pressure, but instead motivation.”

“The first match was an easy win. I feel very good now and hope I can win all the matches. I want to win,” she told Xinhua news agency.

In the women’s draw, world number one Tai Tzu-ying of Taiwan eased through in her opener to underline her status as the woman to beat.

The top seed was never really in trouble against Hsuan-Yu Wendy Chen of Australia, winning 21-10, 21-16 to reach the third round.

Ratchanok Intanon survived a major scare as the fourth seed battled back from the brink of a shock early exit.

Ratchanok looked set to go out to the unseeded Mia Blichfeldt of Denmark, before recovering her poise to gleefully reach round three, winning 16-21, 22-20, 21-10.