Runversation: A rum character takes the bait for a run

Chris Estwanik breezed past in a suit and broke the half marathon record for a free round of dark rum. 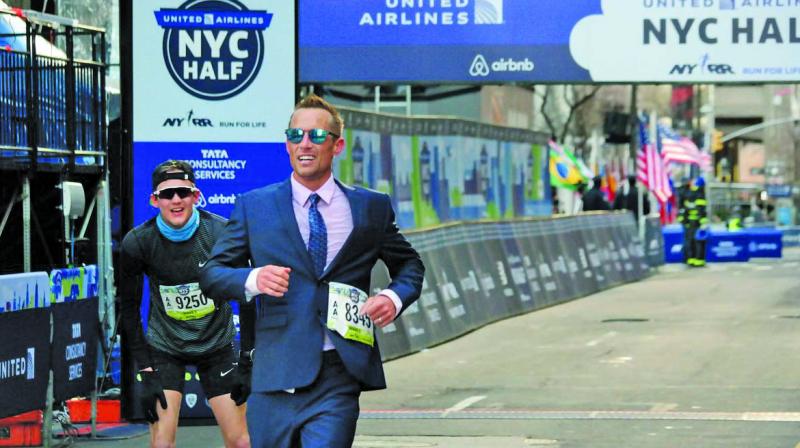 Chris Estwanik breezed past in a suit and broke the half marathon record for a free round of dark rum.

There are so many facets to running, and this opens the door to a new way of experiencing running — wearing a costume. Majorly popular in overseas marathons and just about making its mark in India, one may find Darth Vader, Spiderman or a classic Disney character running alongside. There are legitimate and serious runners, there are running quirks and then there are some who get into the character to go the distance. But seriously... Why? How does this happen? How is it normal for a certain percentage of participants in a daunting endurance event to go all Batman or a Disney character?

At the New York City Half Marathon, a man in a well-tailored two-piece suit sprinted past the finish line. To most it would seem like a man in a hurry to attend an urgent board meeting. But Chris Estwanik was attempting to break the Guinness World Record for the fastest half marathon wearing a complete suit, and what was the bait? He was offered a free round of dark rum based cocktail if he could do so. A day before the race, he picked up his bib, walked to the nearest suit store and picked up a suit. On the race day he zoomed through the streets of Manhattan with spectators laughing at him and some even offering marriage proposals. But Estwanik went all out and  decimated the earlier record of running in a suit. Talking to a reporter he said, “I am the type of guy where it doesn’t take much to accept a challenge. Something like this isn’t befitting of my personality; I am a pretty serious guy at heart.”

The best — and worst —thing about running is that you will never master it. You will never be perfect at it. You challenge yourself every time you lace on your shoes. You will have awful runs, when your feet feel like blocks of concrete and you just can’t catch your breath, and then you will have awesome runs when all the planets align and everything goes your way, and you will have. On some runs, that voice in your head will tell you to stop less than 1 km in; on other runs, that voice in your head is cheering you on as you pass the 21 km mark. All you can do is just keep your eye on the finish line, know that there will be setbacks and just keep running. For Chris Estwanik everything fell in place.

Think about it: You never see participants in other sporting events wearing costumes. Well, unless you count golfers, whose pants alone can inspire laughter. So, what could possibly explain the costumes-in-marathons phenomenon? Standing around at the start of a big race can fill you with existential despair; it’s hard not to feel like just another face in the crowd. Unless you’re wearing a batman costume, or dressed as a superhero or pirate! Today, certain set of runners don’t care about finishing times. For them, the marathon is less a foot race and more a 21-km Mardi Gras. Why not dress up?

In the end, running is its own reward.