Four years ago, Sindhu had hoped of retaining the women’s singles gold that Saina Nehwal won for India for the first time in the Delhi edition. 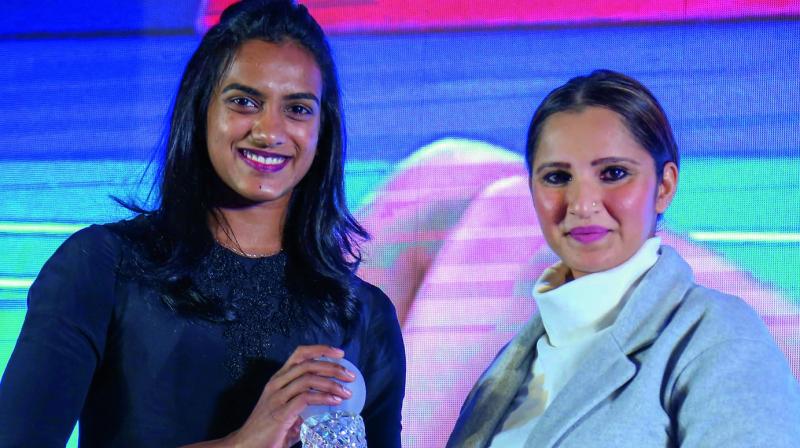 P.V. Sindhu and Sania Mirza at an awards function in Hyderabad. (Photo: PTI)

New Delhi: Pegged back by an ankle sprain prior to the Commonwealth Games, Olympic silver medallist P.V. Sindhu hopes to regain peak fitness before the start of individual events and assured India will return with multiple medals.

Sindhu had suffered a sprain in her right ankle while practising at the Gopichand Academy in Hyderabad on Tuesday but scans showed no injury to the bone or ligament, to the relief of Indian contingent and fans.

“Preparation wise everything has been going on well for me. Of course, unfortunately, I sprained my ankle a bit but I think I should be fine by the time the Games starts, I hope I will be completely fit by then,” the 22-year-old said.

Four years ago, Sindhu had hoped of retaining the women’s singles gold that Saina Nehwal won for India for the first time in the Delhi edition.

However, the yellow metal eluded her and she settled for a bronze after losing in the semi-finals to Canada’s Michelle Li.

A lot has changed since then and Sindhu is now India’s top shuttler and a prime contender for the gold medal at Gold Coast Games, given the field which is much less competitive than compared to the Super Series tournaments that she plays throughout the year.

“Last time I had a bronze and this time I want to do well and give my best. I can’t tell a particular number but definitely we will get a lot of medals this time,” she said.

At Glasgow CWG, Sindhu had entered the tournament as an 18-year-old who had become the first Indian woman to win a medal at the world championship. Though she settled for a bronze in the event, she went on to add another bronze at the 2014 Copenhagen World Championship.

The following year, Sindhu reached the finals at the Denmark Open and then clinched her third successive title at Macau Open. However, those were mere trailers of what was to come next.

Sindhu exploded in 2016 when she clinched India’s first silver medal in badminton at the Olympics and became the toast of the country with her title at the China Open. She also won the Malaysia Masters early in that year.