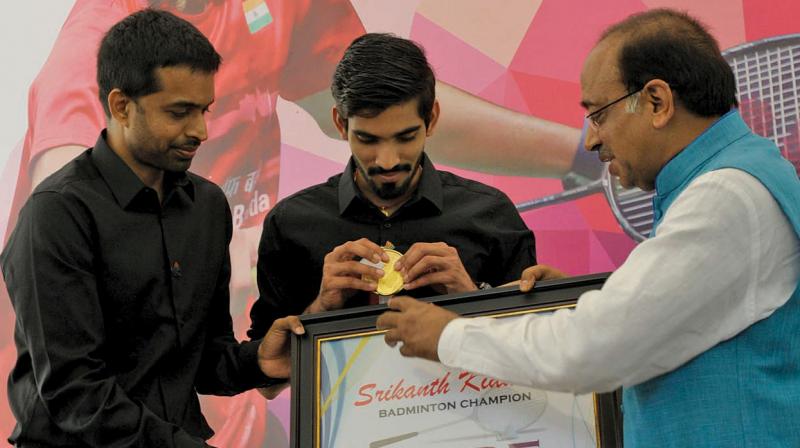 New Delhi: After winning back-to-back crowns in Indonesia and Australia, Kidambi Srikanth has now set his eyes on the World Championship, saying consistency would be the key to success at the event.

“I think we all are playing well. I can’t really say if we will definitely win a medal. We have a chance for sure but we have to be 100 per cent on that day and every match,” Srikanth said here on Saturday.

“We have to play consistently well, because it is such a big tournament and everyone prepares really hard.”

Srikanth, who reached three successive Super Series finals, believes he is peaking at the right time for the prestigious World Championship.

“It has been fantastic the last one month. Right from Singapore Open, it has been great. I have received more than what I have asked for, so I am very happy. I don’t know how to express it,” said Srikanth, who also won the 2014 China Super Series Premier and 2015 India Super Series.

“I am really happy at how I played last month. I really want to train hard for the next few weeks ahead of the tournament and play consistently at the World championship,” he said.

“I never lost the chance of being in the team. After winning the China Open I won the India Open in 2015.

“I managed to win the Syed Modi in 2016 and then lost the Olympic quarters by just a point. So I have been playing well in important tournaments,” he said.

“The matches I lost were very close one, three sets. It is not easy but I always believed that if I can continue working hard, I can do well and I am happy everything worked for me,” he added.