Subramanian has plans to whip up more football frenzy here on the eve of the final on July 15 by offering every customer a free dosa at Jai Hind. 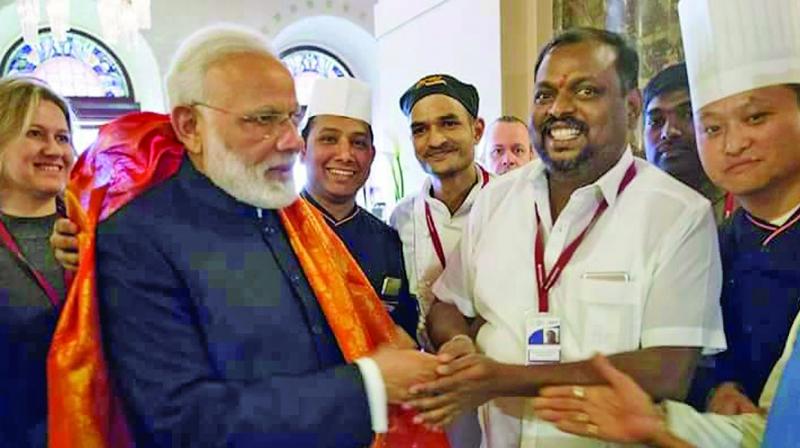 Moscow: When the high and mighty from India want to tuck into a humble dosa during a visit to Russia, Jai Hind is at hand to satisfy their taste buds with two branches in St. Petersburg and one in Moscow. From Prime Minister Narendra Modi to Andhra Pradesh chief minister Chandrababu Naidu, a host of Indian dignitaries have enjoyed eating dosas prepared by the Indian restaurant here.

A. Vijaya Subramanian, whose younger brother Kasi Viswanathan owns the chain of restaurants, said the power of dosa proved irresistible during Mr Modi’s visit to St. Petersburg earlier this year. “Initially we had been asked to prepare a dosa only to our Prime Minister. A few minutes after we had sent one to him, we received a dosa order for all other delegates. I don’t know whether it was Mr Modi’s recommendation,” he added, laughing.

As an official service provider to the Indian embassy here, Viswanathan’s group has taken care of the culinary needs of many other top Indian officials. “I have personally served all top judges of our country in recent times, as the international legal forum conducts its annual meeting in Russia regularly. For all events organised by the Indian embassy here, we prepare live dosas in large numbers,” Subramanian said.

According to Subramanian, national security advisor Ajit Doval is a big fan of Jai Hind dosa, as is actress and politician Hema Malini. “Russians also love Indian food but they want everything to be less spicy. Iceland fans who were in Moscow for the World Cup enjoyed our food so much that a high-ranking official of the country has invited us to open an Indian restaurant in Reykjavik,” he said.

A keen follower of politics from his college days, Subramanian invariably succeeds in striking a rapport with all the Indian leaders he meets.

“Mr Naidu was very fond of me. He made me sit with him when he had lunch during a visit in 2016. I requested him to build a temple to Lord Balaji in Russia because Hindus here badly need a place of worship,” he said.

Former defence minister George Fernandes is a close friend of Subramanian’s. “He was the leader I used to look up to. My friendship with him goes back to my college days when I had invited him to a function as chairman of a students’ body. It is sad that an illness is keeping him away from the public eye,” he said.

Subramanian and Viswanathan, whose hometown is Tirunelveli, import ingredients from Tamil Nadu to cook south Indian dishes. “The quality of black gram and rice is crucial for the taste of dosa,” said Subramanian.

As the restaurant’s Moscow branch is in the midst of sports arenas built for the 1980 Moscow Olympics, Subramanian meets big stars quite often. “Leander Paes comes to our restaurant whenever he is in Moscow. I handed over special sweets to Croatia’s Marin Cilic after he won the Kremlin Cup in 2015. Cilic was happy to know that I’m from Tamil Nadu because he was a regular at the Chennai Open,” he said.

Ever ready to help Indians who come to Moscow, Subramanian found accommodation for the football fan from Kerala who had cycled all the way from India to Russia for the World Cup. “I also got a big Messi banner printed for him,” he said. Subramanian attended the Denmark-France group stage match at the Luzhniki Stadium along with the Kerala fan, wearing a dhoti.

Subramanian has plans to whip up more football frenzy here on the eve of the final on July 15 by offering every customer a free dosa at Jai Hind.